North Korea's economy hasn't been in such bad shape since his father was battling floods, droughts and a famine that some estimates say killed as much as 10 per cent of the population.

The South Korean central bank's annual report on its northern neighbour - due for release later this month - will provide a fresh look at the impact of US President Donald Trump's pressure campaign just as the two sides prepare to restart talks.

"As long as sanctions remain, time is on the US side," said Dr Kim Byung-yeon, who also wrote the book Unveiling The North Korean Economy.

"Sanctions are the most effective means to draw North Korea into negotiations, so they should not be lifted or eased without major progress on denuclearisation."

A decline of 5 per cent would mean that international curbs on North Korean trade - measures crucially backed by China - have put the country on its weakest economic footing since 1997.

Back then, the isolated nation was reeling from policy missteps under Mr Kim Jong Il and a famine so bad some defectors reported rumours of cannibalism.

The Bank of Korea (BOK) estimated a 3.5 per cent contraction in 2017, leaving North Korea an economy roughly the size of the US state of Vermont. 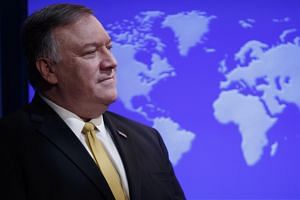 Pompeo hopes US, North Korea can be 'more creative' in nuclear talks

Mr Park Yung-hwan, a BOK official in charge of North Korean growth data, declined to comment on the central bank's latest calculations since the work was still under way.

One thing sanctions aren't doing: stopping Mr Kim from developing the nuclear arsenal that prompted his showdown with Mr Trump.

The cost launching the more than 30 ballistic missiles Mr Kim Jong Un has tested since taking power in 2011 comes in at about US$100 million (S$135.73 million), according to estimates by South Korea's Defence Ministry.

Nevertheless, Mr Trump is counting on the economic pressure to compel Mr Kim to compromise after the two leaders agreed in a historic meeting at the Demilitarised Zone last month to resume working-level talks.

The President had earlier rejected the North Korean leader's offer to dismantle his ageing nuclear complex at Yongbyon in exchange for the removal of the toughest sanctions.

Here's a look at some indicators of North Korea's current slump:

North Korea is heavily reliant on China, which accounts for about 90 per cent of the country's trade.

And Beijing's decision to support tougher international sanctions against North Korea following its sixth nuclear test in September 2017 has put severe pressure on the economy.

Sanctions imposed by the UN Security Council hit everything from North Korea's exports of raw materials, minerals and clothes to the movement of manual labourers and software engineers.

The drying up of hard currency due to plunging trade is potentially creating an "economic crisis" for Mr Kim, the state-run Korea Development Institute in Sejong said earlier this month.

China's imports from North Korea have slowed to a trickle, falling about 90 per cent year-on-year to just US$195 million in 2018, according to the Korea International Trade Association.

Meanwhile, exports of food and fuel from China to the North have also tumbled.

Before sanctions were in place, North Korea imported about 3.9 million barrels of oil in 2015, according to the Central Intelligence Agency's The World Factbook. Sanctions capped the country's imports to 500,000 barrels of oil last year.

But Mr Kim's regime has found ways to evade the sanctions, using illicit high seas transfers to obtain oil and export its goods, the US and its allies have said.

The country's ports received at least 263 tanker deliveries of refined petroleum, according to US estimates, enough to bring as much as 3.78 million barrels of fuel.

The fuel crunch has exacerbated decades of economic stagnation.

North Korea's oil consumption has fallen by about 80 per cent from 1991 to 2017, according to the United Nations World Food Programme, one of the few international bodies with access to on-the-ground reporting and statistics in the country.

Last year, farmers had a little less than 90 millilitres of fuel a day to farm an area about the size of two soccer fields, according to calculations based on WFP data.

The sanctions have led to shortages of other necessary agricultural items, including machinery and spare parts, and farm output has dropped in the provinces that make up North Korea's southern and western breadbaskets, the World Food Programme and Food and Agricultural Organisation of the United Nations said in a May assessment.

Paddy production declined at least 17 per cent last year in South Hwanghae and North Pyongan provinces, regions that together account for half of North Korea's rice.

"The unintended negative impact sanctions can have on agricultural production, through both direct and indirect impacts, cannot be ignored," the report said.

In April, Mr Kim replaced his prime minister and leading technocrat Pak Pong Ju with Mr Kim Jae Ryong, a veteran overseer of one of North Korea's most impoverished provinces, whose reputation for weathering tough times suggests leader Kim may also see a need to dig in rather than experiment should the sanctions continue.