WASHINGTON/SEOUL (REUTERS) - US President Donald Trump has said that North Korea does not have any economic future with nuclear weapons as the Pentagon confirmed that the United States and South Korea had agreed to end joint large scale spring military exercises.

He added that the relationship with North Korea seemed to be "very, very strong".

According to a statement, acting Pentagon Chief Patrick Shanahan spoke with his South Korea counterpart on Saturday (March 2) and they agreed to adapt their training programmes.

The two "made clear that the alliance decision to adapt our training programme reflected our desire to reduce tension and support our diplomatic efforts to achieve complete denuclearisation of the Korean Peninsula in a final, fully verified manner", the Pentagon said.

Special Representative for Korean Peninsula Peace and Security Affairs Lee Do-hoon is planning on visiting the United States in the coming week to meet with US officials to discuss the second US-North Korea summit as well as the future agenda, according to a South Korean official. 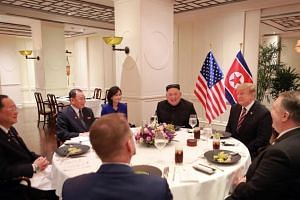 Cigarettes and food: Five things we learnt from the Trump-Kim summit in Hanoi

What's next after Hanoi summit?

The Pentagon said the US and South Korea had agreed to "newly designed Command Post exercises and revised field training programs".

US officials have long said the scope of the spring exercises, known as Foal Eagle and Key Resolve, would be reduced.

Reuters and others reported on Friday that such an announcement would take place. To encourage talks, the United States and South Korea have suspended a number of military exercises since the first summit last year between North Korea leader Kim Jong Un and Mr Trump.

In Vietnam this week, the second meeting between Mr Trump and Mr Kim ended without a deal on sanctions relief North Korea would get in exchange for steps to give up its nuclear programme.

Mr Trump on Saturday addressed criticism from the parents of Mr Otto Warmbier, an American student who died after 17 months in a North Korean prison. They had complained when Mr Trump said at a Hanoi news conference that he believed Mr Kim had nothing to do with Mr Warmbier's death.

Mr Trump said he was trying to maintain "a delicate balance" to coax the North Koreans into giving up their nuclear programme.

The United States and North Korea have said they intend to continue talks, but have not specified when.

Some observers credited Mr Trump for refusing to be drawn into a bad deal. Others criticised him for praising Mr Kim's leadership and accepting his assertion that he had been unaware of Mr Warmbier's treatment.

Analysts believe that North Korea has 20 to 60 nuclear warheads which could threaten the US mainland if fitted to its intercontinental ballistic missiles. The United Nations and the United States ratcheted up sanctions when North Korea conducted nuclear and ballistic missile tests in 2017.

Washington has demanded complete, verifiable and irreversible denuclearisation before sanctions can be lifted, a position that Pyongyang has denounced as "gangster like".