North Korea said this month it was willing to restart talks in late September but Washington needed to adopt a fresh approach.

US Secretary of State Mike Pompeo said last week that meetings in September were not possible, though he added that Washington is ready to meet and believes it is important.

In a speech at the UN General Assembly, Pyongyang’s UN ambassador Kim Song said it was time for Washington to share proposals for talks.

“Assuming that the US has had enough time to find out a calculation method that can be shared with us, we expressed our willingness to sit with the US for comprehensive discussion of the issues we have deliberated so far.”

On the final day of the annual gathering of world leaders at the United Nations, he called for the full implementation of a statement issued by Trump and North Korean leader Kim after their first meeting in Singapore in June last year.

The pair agreed in the statement to foster new relations and work towards the denuclearisation of the Korean peninsula.

“More than one year has passed,” Kim Song said. “The relations between the DPRK and the US have made little progress so far and the situation of the Korean peninsula has not come out of the vicious cycle of increased tension.”

“It depends on the US whether the DPRK-US negotiations will become a window of opportunity or an occasion that will hasten the crisis,” he said, referring to North Korea’s formal name, the Democratic People’s Republic of Korea (DPRK). 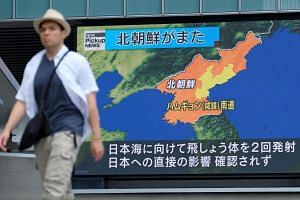 North Korea says lack of progress casts doubt on prospects for future summit with US: KCNA

Trump’s former national security adviser John Bolton, a hawk on North Korea who was fired three weeks ago, said in a speech on Monday that North Korea has no intention of giving up its nuclear weapons and benefits from stalling.

North Korean Foreign Minister Ri Yong Ho did not travel to the United Nations this year “due to his schedule,” the North Korean UN mission said. Ri has attended the high-level UN meeting in New York for the past three years.

Trump made only a brief reference to North Korea during his speech to the UN General Assembly last week, telling the 193-member world body that he had pursued “bold diplomacy” with North Korea’s leader.

“I have told Kim Jong Un what I truly believe: that, like Iran, his country is full of tremendous untapped potential, but that to realize that promise, North Korea must denuclearise,” Trump said.

During his inaugural UN speech in 2017, Trump threatened to wipe out North Korea, however, since June last year he has met three times with its leader Kim in a bid to convince Pyongyang to dismantle its nuclear and missile programmes.