WASHINGTON (AFP) - Mr John Bolton warned on Monday (Sept 30) that North Korea had not truly chosen to give up nuclear weapons in the hawk's first public appearance since he left as President Donald Trump's national security adviser.

At a think-tank conference on North Korea, Mr Bolton said he could now "speak in unvarnished terms" about the "grave threat" posed by the regime of Mr Kim Jong Un, who has courted Mr Trump.

"It seems to be clear that the DPRK has not made a strategic decision to give up its nuclear weapons," Mr Bolton said, referencing the North's official name, the Democratic People's Republic of Korea.

"In fact, I think the contrary is true. I think the strategic decision that Kim Jong Un is operating through is that he will do whatever he can to keep a deliverable nuclear weapons capability and to develop and enhance it further," Mr Bolton said at the Centre for Strategic and International Studies.

His comments are at odds with Mr Trump's rosy depictions of Mr Kim after three meetings, with the US leader hailing the young strongman's "beautiful letters" and insisting that Mr Kim would stay true to his word.

Mr Bolton has long been known for his strong opposition to North Korea, which once, before he served with Mr Trump, denounced him as "human scum".

Mr Trump has played them down, saying that Mr Kim enjoys the launches and that they do not violate agreements.

"The testing of shorter-range ballistic missiles that we've see in recent months doesn't give us any reason to think that those are not threatening," he said. 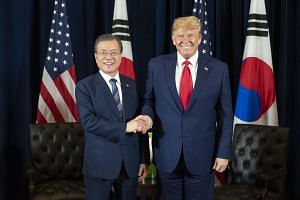 North Korea says lack of progress casts doubt on prospects for future summit with US: KCNA

He said that short-range projectiles would help the North develop the technology behind longer-range missiles.

He also said that the United States was paying insufficient attention to tensions between South Korea and Japan, which have soared over issues related to colonial history.

"It's well below the radar screen here in the United States, which is a big mistake for our country not paying more attention to," he said.

Mr Trump announced on Sept 10 that he had fired Mr Bolton - who said he quit on his own - after multiple disagreements.

Besides North Korea, Mr Bolton has pushed for a tough line on Iran and Venezuela, musing in the past about military action.

Mr Bolton at the conference urged a more engaged United States, an implicit criticism of Mr Trump's hopes to scale back US commitments overseas.

"This is not the time for US disengagement or withdrawal. It is a time for more US involvement and leadership on the Korean peninsula, in Asia and worldwide - more, not less."