PYONGYANG(AFP, BLOOMBERG, REUTERS, WASHINGTON POST) - US Secretary of State Mike Pompeo is expected to return from North Korea with three American detainees, as well as details of an upcoming summit between leader Kim Jong Un and US President Donald Trump, a South Korean official said on Wednesday (May 9).

Pompeo arrived in Pyongyang on Wednesday from Japan and headed to the Koryo Hotel in the North Korean capital for meetings, a US media pool report said.

He told North Korean officials in Pyongyang that the US is committed to working with North Korea to achieve peace on the Korean peninsula.

“I have high expectations the United States will play a very big role in establishing peace on the Korean peninsula,” said Kim Yong Chol, director of the United Front Department responsible for North-South relations. The remarks were provided in a pool report.

In response, Pompeo said the group with him was “equally committed to working with you to achieve exactly” that.

“For decades, we have been adversaries. Now we are hopeful that we can work together to resolve this conflict, take away threats to the world and make your country have all the opportunities your people so richly deserve,” Pompeo added.

Trump disclosed Pompeo's surprise trip to North Korea on Tuesday while announcing the US would pull out of the multinational accord intended to curb Iran’s nuclear programme.

The visit is Pompeo’s second trip to North Korea in recent weeks and came a day after Kim met Chinese President Xi Jinping in China's port city of Dalian – the second time in six weeks – highlighting efforts by the Cold War-era allies to mend frayed ties.

Since then, he said, discussions have been aimed at putting “outlines around the substance of the agenda for the summit. Today we are hoping to nail some down” and establish “a framework for a successful summit between the two presidents.”

Pompeo said the US has no interest in following a step-by-step process, which, under past administrations, failed to end the North's nuclear ambitions.

"We're not going to relieve sanctions until such time as we achieved our objectives," he said.

"We are not going to do this in small increments, where the world is essentially coerced into relieving economic pressure. That won't lead to the outcome that I know Kim Jong Un wants and I know President Trump is demanding." 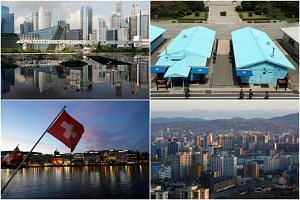 How does Singapore score against other possible Trump-Kim summit venues? 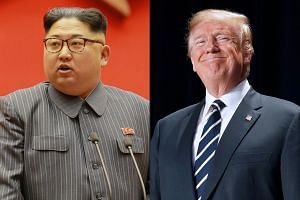 Trump-Kim summit likely in mid-June if held in Singapore

Pompeo said he hopes to establish a "set of conditions" that will give North Korea an opportunity to have a "historic, big change" in its security relationship with the US, and achieve the US goal of a complete, verifiable and irreversible denuclearisation of North Korea.

"We think there's enough that's been discussed that it's important for me to sit with senior North Korean leaders and try and make a big move towards making sure we're prepared for the summit," the top American diplomat said, adding that he's unsure whether he will meet with Kim.

He told reporters he would look to prepare for the summit between Trump and “Chairman Un”, prompting derision from observers.

“ Pompeo doesn’t know the surname is Kim, but he’s definitely on top of all the conceptual and semantic nuances associated with the phrase ‘denuclearisation of the Korean Peninsula’,” arms control specialist Jeffrey Lewis tweeted derisively.

Pompeo's visit has also heightened expectations that the three US citizens being held in the North will be released soon. There have been reports they may have been moved in preparation for a release.

"We have been asking for the release of these detainees ... for 17 months," Pompeo said. "We'll talk about it again today. I think it'd be a great gesture if they would choose to do so."

"We expect him to bring the date, time and the captives," the official said, while speaking on condition of anonymity.

Six South Koreans are also being held – three Christian missionaries and three defectors originally from the North – with Seoul also pushing for their release.

Trump earlier said the location of his meeting with Kim has already been set.

Previous detainees have been set free into the care of high profile US visitors. Pompeo’s itinerary – including who he would meet in Pyongyang – was not clear.

Two people with knowledge of the trip told The Washington Post that Pompeo was expected to bring them home.

"We'll all soon be finding out," Trump replied after a reporter asked him about the prisoners.

“We think relationships are building with North Korea. We will see how it all works out. Maybe it won’t. But it can be a great thing for North Korea, South Korea and the entire world,” Trump said in a televised address from the White House.

Three Korean-Americans - Kim Dong Chul, Kim Hak Song and Kim Sang Duk - have been accused of various acts considered hostile to the government. Trump and his lawyer, Rudy Giuliani, have dropped hints recently that they could be freed very soon.

Last weekend, national security adviser John Bolton told Fox News Sunday, "If North Korea releases the detained Americans before the North-US summit, it will be an opportunity to demonstrate their authenticity."

The end of their incarceration in a country known for its brutality to prisoners would close a long chapter in hostilities between the United States and North Korea, a period during which US officials accused Pyongyang of using American citizens as bargaining chips.

One of the prisoners, Kim Dong Chul, a former Virginia resident in his mid-60s, was detained in October 2015, while the other two were detained after Trump took office.

In his second visit to North Korea in as many months, and his first as secretary of state, Pompeo is flying into one of the world's most reclusive countries with no assurances of exactly who he will meet. During his last visit over Easter, when he was CIA director, Pompeo met with Kim Jong Un in an effort to assess what a summit might accomplish.

Just before he landed in Japan for refuelling, Pompeo said he doesn't know exactly who he will see this time.

"We're prepared to meet anyone who can speak on behalf of the North Korean government and give us solid answers so we're prepared."

Pompeo's return to North Korea comes in what it only his second week as the administration's top diplomat. Arrangements were made in great secrecy befitting a former CIA head.

Pompeo has promised to "bring back the swagger" to a State Department that has been sidelined in some foreign policy debates. His high-profile visit appears to be a splashy step in that direction.

Pompeo may get an earful of complaints from the officials he meets.

Pyongyang has been disgruntled over what it called "misleading" assertions from some US officials that North Korea is considering denuclearisation because of its fear of US military prowess and to alleviate punishing sanctions - a "maximum pressure campaign" laid by Pompeo's predecessor, Rex Tillerson, who was fired by Trump in March.

North Korea made its displeasure clear on Sunday, the day before Pompeo departed Washington.

A spokesman for its foreign ministry labelled the US claims of credit for the apparent shift in North Korean policy a "dangerous attempt" to upset detente between two nations whose leaders only a few months ago were threatening nuclear war.

At least 16 US citizens have been arrested in North Korea since the 1990s. Several of them have been subjected to show trials and forced to make public confessions to crimes against the state before being sentenced to brutal labour camps. Most served part of their sentences before being released, usually after visits from high-profile Americans such as former presidents Bill Clinton and Jimmy Carter.

Last summer, North Korea turned over custody of American college student Otto Warmbier, who returned home to Cincinnati, Ohio, in a coma after 17 months in captivity after being detained during an organised tour of Pyongyang.

Warmbier died a few days later, and Trump has highlighted his death in several major speeches, including the State of the Union address in January and remarks to the South Korean general assembly last fall.

Warmbier's parents have sued North Korea in federal court, charging that the regime "brutally tortured and murdered" their son. Trump spoke with the family on Friday to offer support ahead of his summit, sources said.

The North Korean regime has long been one of the most brutal in the world, sentencing tens of thousands of its own people to brutal labour camps and killing political rivals. Among those assassinated by the regime since Kim Jong Un took power in 2011 after his father's death are Kim's half brother Kim Jong Nam and his uncle.