SEOUL (REUTERS) - Mr Song Min-su, a Japanese major in his final year at Hannam University, south of Seoul, has watched in dismay as a spat between South Korea and Japan over wartime forced labour has spiralled into a damaging political and economic row.

Mr Song, 25, has been pursuing his dream of working in Japan.

With historic labour shortages in Japan, he had been confident he would avoid the tough job search many of his peers faced at home in South Korea, where youth unemployment is growing.

But Japanese curbs on the exports of high-tech materials to South Korea has escalated a bitter diplomatic feud between the neighbours, sparking boycotts that have hit the sales of Japanese cars, beer and other goods in South Korea, as well as travel to Japan.

South Korea has long had testy relations with former colonial ruler Japan, with Tokyo citing a dispute over forced labour during World War II as a factor that led to tighter export controls implemented in July.

The dispute has derailed a surge in hiring of highly educated South Korean graduates by Japanese companies in recent years, forcing job seekers, employment consultants and the Seoul government to rethink Japan as a place to work.

That has piled more pressure on South Korean President Moon Jae-in, who came to power in 2017 on promises to create jobs and address inequality.

Nearly 10 per cent of South Koreans aged 15 to 29 were jobless in July, according to Statistics Korea, but the department says the real rate could be as high as 24 per cent including those with temporary or part-time jobs, who gave up looking for jobs or who are preparing for state examinations. 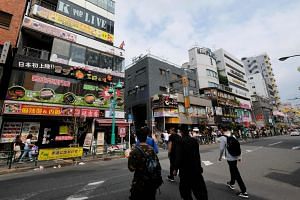 Japan, South Korea and the legacy of a tangled history

Employment growth in South Korea has been sluggish, as conglomerates that dominate the economy have slowed hiring due to a sharp rise in minimum wages and a cooling economy, especially in the manufacturing and construction industries.

Japan, with unemployment at a 26-year-low, was the most popular overseas place to work for Koreans in 2014 and 2016 to 2018, data from Human Resources Development Service of Korea shows.

Japan was the destination for nearly one-third of the 5,783 South Korean graduates who found jobs overseas last year under government programmes, more than triple the number in 2013.

But last month, the Labour Ministry cancelled a job fair focused on Japan and South-east Asia for late September that would have been the largest organised by the government, blaming the strained ties.

Another job expo held by the Korea-Japan Cooperation Foundation for Industry and Technology in mid-July, also with a focus on jobs in Japan, received 20 per cent fewer participants than its previous fairs, an official told Reuters.

South Korea's Labour Ministry is planning the second of its biannual global job fairs in November, but instead of focusing on jobs in Japan as it did last year, it plans to broaden the list of countries.

Japanese employers made up 115 of the 184 companies that took part last time.

Some private job fair organisers say public sentiment on Japan is souring as the dispute drags on and local media highlight negative comments by Japanese leaders.

"I recently received a few calls from my students that they decided to no longer look for jobs in Japan," said Kasugai Moe, CEO of KOREC, a recruiting agency specialising in Japan.

Some students said their parents had disapproved of them seeking jobs in Japan, she added.

KOREC has decided to scrap its next job fair scheduled for later this month.

Park Cheol-su, head of the careers office at Hannam University, said while he routinely hosted 10 or more Japanese companies for on-site recruiting each year, he has not heard from any companies in recent weeks.

Japanese employers are worried candidates who have accepted job offers might change their minds, according to a Korea International Trade Association official speaking on condition of anonymity.

Mr Song, the Japanese major, says he will keep looking for jobs in Japan but is also keeping his eyes open for opportunities at home.

"Boycott is a matter of individual choice, but employment is a bread-and-butter issue," he said.