SEOUL (REUTERS, KYODO) - South Korea said on Thursday it will terminate an intelligence-sharing pact with Japan, prompting a protest from Tokyo and deepening a decades-old row over history that has hit trade and undercut security cooperation over North Korea.

With the decision not to extend the pact, the political and trade disputes between South Korea and Japan now extend into some of the most sensitive national security issues in the region.

The arrangement was designed to share sensitive information on the threat posed by North Korea's missile and nuclear activities, and the decision to end it comes after North Korea launched a series of short-range ballistic missiles in protest against what it sees as military build-ups in South Korea and Japan.

The General Security of Military Information Agreement (GSOMIA) was due to be automatically renewed on Saturday, unless either side decided to cancel it. The decision was announced after an hour-long discussion within the presidential National Security Council (NSC). South Korean President Moon Jae-in approved it.

"Under this situation, we have determined that it would not serve our national interest to maintain an agreement we signed with the aim of exchanging military information which is sensitive to security," Kim told a news conference.

South Korea would deliver a formal notice to Japan within the due date, Kim said.

Kono lambasted the decision, calling the move “extremely regrettable”, and said that it “completely misreads the security situation in North-east Asia”.

Japanese Chief Cabinet Secretary Yoshihide Suga had told a news conference before the announcement that Japan believed it should cooperate with South Korea “where cooperation is necessary” despite the recent strain in ties.

This week the foreign ministers of the two countries met outside Beijing and promised to keep talking, but failed to reach any substantive agreements.

The South Korean decision is likely to be met with dismay in the United States, which fears weakened security cooperation.

Intelligence sharing is key to developing a common defence policy and strategy, and all three countries are safer when they work together, Pentagon spokesman Lieutenant Colonel Dave Eastburn said. “We encourage Japan and Korea to work together to resolve their differences,” he said in a statement. “I hope they can do this quickly.”

South Korea's foreign minister, Kang Kyung-wha, emphasised that the decision to end the intelligence pact was a result of a lack of trust in Japan. "We will continue to strengthen cooperation with the United States and develop the alliance," she told reporters in Seoul.

South Korea’s defence ministry said that regardless of the end of GSOMIA, it would maintain a “stable” joint defence posture based on a robust alliance with the United States.

South Korea had informed the United States that it would not be extending the deal shortly before the announcement, one Blue House official said.

One Western military source said the intelligence-sharing was sometimes limited, but nevertheless an important area of cooperation in the face of threats from North Korea. 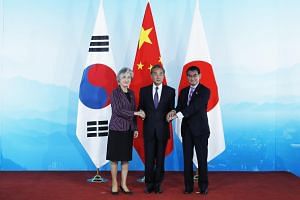 GSOMIA facilitated the sharing of information on North Korea’s nuclear and missile threats, which remain despite a series of summits and negotiations with North Korea, said Cho Tae-yong, a former South Korean national security adviser who worked on the deal when it was first signed.

"Ending GSOMIA is not only the wrong card to play to press Japan, but it is just not helpful for our security," he said.

Shin Beom-chul, a senior fellow at the Asan Institute for Policy Studies in Seoul, agreed. "It is a decision from which there's a lot more for us to lose than to gain," he said. "It would increase our own security concerns and inflict diplomatic isolation upon ourselves by destroying the foundation of trilateral security cooperation with the United States."

The US envoy on North Korea, Stephen Biegun, raised the issue during a meeting with South Korea's deputy national security adviser, Kim Hyun-chong, before the NSC gathering.

The decision also comes as China and Russia have been more assertive in the region, flying their first joint military air patrol together in July, which triggered an international incident with South Korea and Japan.

Prior to signing the agreement in 2016, under US pressure, South Korea and Japan shared intelligence through the United States. South Korea went ahead with the deal at the time despite opposition from some political parties and a large section of the public, who remain bitter over Japan's actions during its colonial rule of Korea from 1910 until the end of World War Two.

A 2012 attempt to seal the deal fell apart in the face of domestic opposition in South Korea toward military cooperation with Japan. Relations between the two US allies are seen at their lowest since they normalised ties in 1965, plagued by bitterness over Japan's occupation, which included the use of South Korean forced labour at some Japanese firms.

South Korea had warned it could reconsider the GSOMIA after Japan imposed export curbs on some materials vital to South Korean chipmakers and stripped South Korea of fast-track export status.

South Korea called the Japanese action retaliation for a South Korean Supreme Court order for Japanese companies to compensate some of their wartime forced labourers last October. Japan condemned the ruling, saying the matter was resolved by a 1965 treaty normalising ties.