Sunday's (July 1) report of his trip to Sinuiju, one of North Korea's earliest special economic zones, came a day after the state media reported his tour of a reed farm in the nearby Sindo county, also on the Sino-North Korea border.

Among his entourage was Kim Song Nam, the first vice director of the ruling Workers' Party of Korea's international department and a known expert on China.

Kim Song Nam also accompanied the leader on the visit to Sindo county, North Pyongan Province. No date was given for the trip to Sindo county, home to the Hwanggumpyong Exclusive Industrial Zone co-developed with China. 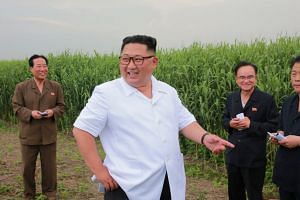 That project has been in limbo since the North's execution of Kim Jong Un's uncle Jang Song Thaek in 2013. Jang was seen as China's main conduit to Pyongyang.

The cosmetics factory, founded in 1949, is the North's first large-scale production base for cosmetics products and is believed to produce the brand "Spring Scent", reported Yonhap news agency.

The border town of Sinuiju was designated as a special economic zone by then North Korean leader Kim Jong Il, father of Kim Jong Un, back in 2002.

"I had always hoped for a visit to the cosmetic factory in Sinuiju… They are famous for producing cosmetics with a spring scent," Kim Jong Un was quoted as saying by the Korean Central News Agency(KCNA).

"After being briefed about the good results at the factory, I took some time out of my schedule to visit."

He also emphasised the modernisation of the facilities and ordered the building of a shop in Pyongyang to sell the brand's cosmetics directly to consumers, according to the KCNA report.

Such inspection trips have raised the prospect of Pyongyang seeking to enhance cross-border economic cooperation with China, experts said, as Beijing appears to be seeking easing of its enforcement of sanctions on North Korea.

Following the historic summit last month (June) between the US and North Korea, China has suggested that sanctions relief could be considered for North Korea. Shortly after the June 12 meeting between Kim Jong Un and US President Donald Trump in Singapore, Chinese Foreign ministry said sanctions are "not the goal in themselves".

"When it comes to small-scale economic cooperation at the cross-border region, China's enforcement of sanctions is not likely to be as strong as it has been," Woo Jung-yeop, research fellow at the Sejong Institute, told The Korea Herald.

Japan's Yomiuri Shimbun reported on Sunday that Kim Jong Un had asked Chinese President Xi Jinping during their third summit in Beijing in June to work towards bringing an early end to economic sanctions imposed on his country.

"It would be wrong if China lifts economic sanctions without any indication of denuclearization from North Korea… but North Korea has made a commitment for complete denuclearization and took some steps proactively," said Yang Moo-jin, a professor at the University of North Korean Studies.