Kim made the request during his third meeting with Xi in Beijing last month, and the Chinese president promised to do his "utmost" to satisfy it, the Yomiuri Shimbun newspaper said.

"We are feeling great pain due to economic sanctions. Now that we have concluded the US-North Korea summit in success, I want (China) to work towards early lifting of the sanctions," Kim reportedly told Xi, according to the newspaper.

Japanese broadcaster NHK reported that China's UN mission and its Russian counterpart on Thursday submitted to the United Nations Security Council a draft press statement calling for the easing of sanctions on the North.

In recent months the Cold War-era allies of China and North Korea have sought to repair ties strained by Pyongyang's nuclear tests and Beijing's support of subsequent UN sanctions.

Kim chose Beijing - his main economic patron and diplomatic protector - for his first official foreign trip in March and met Xi again in May in the northeastern port city of Dalian.

Kim asked Xi to help ease the sanctions that have crippled North Korea's economy, and urged China to back Pyongyang in its denuclearisation talks with Washington, the report said.

Xi in turn told Kim he "actively supports North Korea's reform and opening-up and will proactively cooperate with issues associated with the efforts", according to the Yomiuri.

He also urged North Korea to "continue (its) consultations with China" as it negotiates with the United States, the report said.

Kim's third official visit to China was seen as a move to reassure Beijing that Pyongyang would not neglect its interests after the historic summit with Trump in Singapore. 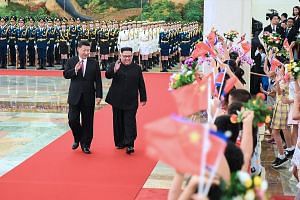 China and the US both hope to see the Korean peninsula free of nuclear weapons.

But Beijing is concerned Washington and Pyongyang might move closer at its expense, a possibility that China sees as threatening to its economic and security interests in the region.

US Secretary of State Mike Pompeo has stressed to China the importance of continued enforcement of sanctions on North Korea to press it to give up its nuclear weapons, after warning of signs of backsliding by Beijing.

The US State Department said Pompeo had spoken to his Chinese counterpart Wang Yi on Thursday and discussed efforts "to achieve our shared goal of the complete, verifiable, and irreversible denuclearisation of the Korean Peninsula".

Pompeo reiterated that North Korea would have a bright future if it denuclearized and emphasized "the continued importance of full enforcement of all relevant UN Security Council resolutions related to North Korea," the department said in a statement.

It said this was especially important when it came to preventing North Korea's illegal export of coal and imports of refined petroleum through ship-to-ship transfers prohibited by the United Nations.

US officials have expressed concern that recent international engagement with Pyongyang could lead countries to relax sanctions pressure.

Mr Pompeo told a US Senate hearing this week he had seen"modest" backsliding by China, North Korea's neighbour and main trading partner, which Trump has courted on the nuclear issue even while threatening a major trade war with Beijing.

"We have observed China not enforcing control over their cross-border areas as vigorously as they were six or 12 months ago," Mr Pompeo said.

In April, the UN Security Council blacklisted dozens of ships and shipping companies over oil and coal smuggling by North Korea, including five based in China.

On Wednesday, Japan's Kyodo news agency said Tokyo had alerted the UN about a suspected ship-to-ship transfer incident on June 21 involving a North Korean tanker in the East China Sea.

Mr Pompeo also spoke with South Korean Foreign Minister Kang Kyung-wha on Thursday to discuss the next steps on engagement with North Korea, the State Department said. It said they agreed on the need to maintain pressure until North Korea denuclearises.

On Thursday, the Financial Times quoted US officials as saying that Pompeo plans to travel to North Korea for talks, but the US State Department has declined to confirm this.

Pompeo said last week he likely would go back to North Korea"before too terribly long" to try to flesh out commitments made at the Trump-Kim meeting.