The leader's statement at a ruling party meeting last Friday (April 20) includes a pledge to seek a favourable international environment for economic development so that he can put the economy "on an upward spiral track".

That builds on his 2012 vow to ensure that no North Koreans would "have to tighten their belts" any longer. It also means he is seeking the help of other countries for developing his economy, including the lifting of trade, financial and energy sanctions that hardened every time North Korea detonated a nuclear bomb.

Scepticism prevails on whether North Korea could emulate the kind of economic success that South Korea has achieved. And history has shown overseas investors can suffer with no recourse if they fail in their risk assessment.

Yet, North Korea is viewed as a wildcard and frontier market that could offer rewards for the business community because of its central location in a booming region encompassing China, Japan and South Korea.

"North Korea can be a bridge linking the peninsula to as far as Europe via China. Imagine how much cargo could flow on that Asian highway."

North Korea has struggled to revive its economy since a famine in the mid-1990s, while South Korea has taken off as an economic powerhouse exporting everything from smartphones to cars.

The Songun, or military-first policy, charted by Mr Kim's father, Mr Kim Jong Il, also dried up economic resources that otherwise would have benefited the economy.

China has been hoarding the rare earths and other minerals in North Korea. Estimated to be worth as much as US$6 trillion (S$7.8 trillion), North Korea's reserves of gold, copper, zinc, coal, magnesite and molybdenite could attract buyers from countries other than China, allowing Mr Kim to diversify his sources of income if he opens up his country. 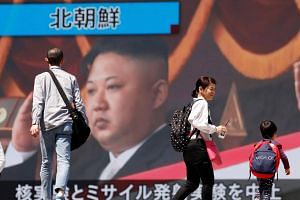 The nation of 25 million also provides a labour force that remains largely untapped. South Korea has shown that a business model combining its capital and know-how with North Korean labour can work when it ran an industrial park in the North Korean border city of Kaesong.

That complex closed in 2016 amid military tensions. The challenge of educating North Koreans with western business practices and technology remains daunting for any investors who may want to start similar projects.

North Korea's isolation has essentially rendered South Korea as an island in the world of commerce. If it opens, it could win transportation fees by allowing South Korea to export its goods to the rest of the world by land.

South Korean President Moon Jae In, set to meet with Mr Kim on April 27, has already suggested his country could receive gas supplies from Russia through North Korea while cargo flows to Europe.

That means building roads and other infrastructure in North Korea. Shares of South Korean builders and cement makers rose earlier this week on hopes for business with North Korea, sending Hyundai Engineering & Construction as much as 9.5 per cent higher on April 18.

A thaw in relations could also reopen the cross-border tours that stopped in 2008 when a South Korean woman was killed at a North Korean mountain resort. That mountain sits close to the Masikryong ski resort that Mr Kim has since built.

Still, much about North Korea's economic development is easier said than done. Mr Kim's promise to halt nuclear tests is a far cry from US and South Korean demands that all nuclear programmes be rolled back. Mr Kim has said nuclear arms safeguard his regime.

It took China, a role model for North Korea, more than two decades to accelerate its growth after leader Deng Xiaoping decided to open up the country. And he did not have to worry about the survival of his nation.

Mr Kim, on the other hand, fears for the lack of a nuclear deterrent - and for a flow of information that could turn his people against him.

"Whether Kim can be North Korea's Deng Xiaoping will depend on how the international community can guarantee its security for denuclearising and offer a chance for economic development," said North Korea researcher Cheong Seong Chang at South Korea's Sejong Institute.