North Korea's agreement on Wednesday (April 18) to broadcast key live events of the upcoming inter-Korean summit is taken as an indication that Mr Kim, the young leader of the isolated country, seeks to shed the negative image of his regime and show the world that he is the leader of a normal country.

Twelve officials from the two Koreas held working-level talks on the North Korean side of the truce village of Panmunjom on Wednesday.

They reached a general agreement on matters related to protocol, security, and media coverage, according to the presidential office.

Mr Moon and Mr Kim are set to hold what would be a third inter-Korean summit on the South Korean side of Panmunjom, which is expected to pave the way for Mr Kim's proposed meeting with US President Donald Trump in May or in early June.

"We also agreed to show key events of the historical South-North Korea summit through live broadcasting, starting with the first handshake of the two leaders," said Mr Kwun Hyuk Ki, a member of South Korea's delegation to Wednesday's talks with North Korea and the director of the presidential press centre. 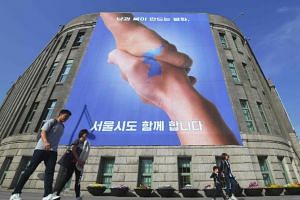 North, South Korea may discuss peace deal at summit, but experts warn of challenges ahead

"I think Kim Jong Un is seeking to use the inter-Korean summit as a chance to improve his image from a reclusive and tyrannical leader to a leader of a normal country and present himself as one of the world's leaders," said Mr Cho Han Bum, a senior researcher at the Korea Institute for National Unification."He is aware that the world's attention is on him."

Whether North Korea will also broadcast the inter-Korean summit live is unclear, however.

"There is a possibility that North Korea may also broadcast live the events of the inter-Korean summit, probably up until the leaders make the opening remarks," he said. "It is also possible that the North will edit out some scenes it doesn't want the public to watch and broadcast the recording later."

Another sign of Mr Kim trying to present himself as a leader of a normal country would be whether his wife Ri Sol Ju will accompany him.

She accompanied Mr Kim on his visit to China last month and received a warm welcome from China's President Xi Jinping and his wife Peng Liyuan.

A Cheong Wa Dae official declined to comment on whether Ms Ri will accompany Mr Kim for the inter-Korean summit, saying, "It is a matter we cannot mention yet."

Mr Moon and Mr Kim are expected to discuss North Korea's path to denuclearisation, ways to build a permanent peace regime on the Korean Peninsula and to improve inter-Korean ties during the summit.

South Korean officials confirmed on Wednesday that the two Koreas will discuss a peace treaty to formally end the 1950-53 Korean War, which ended in an armistice and left the Koreas technically still at war.