TOKYO (XINHUA) - Shaken by rising cases of abuse, the Japanese government on Tuesday (March 19) approved a revision to a child abuse prevention law that will ban parents and guardians from physically punishing children.

The revision Bill and related legislation will be deliberated during the ongoing parliamentary session, with the government aiming for it to be enacted in April next year.

Japanese Prime Minister Shinzo Abe told a Cabinet meeting before endorsing the Bill that it is the responsibility of all adults to protect the lives of children, and that the government will powerfully and swiftly work to take steps to prevent child abuse.

Mr Abe, citing a rise in child abuse cases in recent years, told his Cabinet ministers to make every effort and utilise all means available to them to eradicate the social crisis.

The Japanese premier also said that prevention and early detection of child abuse are vital and that seamless communication between the authorities is key to better protect and support victims.

The draft Bill bans parents, guardians and others legally responsible for caring for children from physically punishing them. It also requires full-time, in-house lawyers and doctors to be based at child welfare centres so that information and professional expertise can be easily shared.

One of the planned amendments to the current law will also empower child welfare centres to separate its staff members involved in taking a child into protective custody from those dealing with the child's parents or guardians. 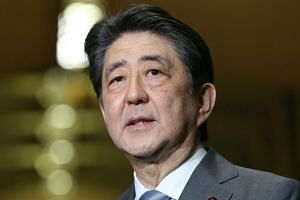 The number of child welfare and consultations centres will also be increased and schools, education boards and welfare centres will be required to adhere to stricter confidentiality requirements.

This is aimed at better safeguarding abused children and ensuring that abusive parents and guardians cannot coerce institutions into providing potentially damaging information or make decisions that could further put an at-risk child in danger.

The government's latest moves come in the wake of the tragic death of five-year-old Yua Funato in March last year. The child was subjected to heinous levels of abuse and neglect at the hands of her parents.

It was revealed after Yua's death that child welfare centres had not communicated with one another effectively when her family moved and had been tardy when it came to checking on the girl's safety.

Another high-profile case that spurred the government to re-examine its child abuse prevention law involved the fatal abuse of 10-year-old Mia Kurihara in Tokyo's neighbouring prefecture of Chiba.

Mia died in January this year as a result of being physically assaulted and deprived of food and sleep. Her parents have since been arrested.

Mia's case revealed fundamental flaws in the protocols of institutions and child welfare facilities that allowed for the young girl's written account of her abuse by her father being handed to him after he coerced her school.

The girl was also returned from protective custody to her abusive parents, revealing a disturbing trend of lax protective measures by the authorities.

According to the latest figures from the National Police Agency (NPA), suspected abuse cases involving minors aged below 18 years old reported by the police to child welfare officials stood at a record-high of 80,104 in 2018, an increase of 22 per cent from a year earlier and nearly three times the level in 2013.

The Bill to revise the child abuse prevention law approved on Tuesday, has, however, been criticised by some experts, as it does not mandate penalties for offenders, nor does it cover psychological abuse.

Dr Takayuki Suzuki, Toyo University professor on child welfare studies who used to work at a child consultation centre, says psychological abuse of children is on the rise in Japan. The NPA's data show that cases of psychological abuse against children comprised 70 per cent of the total abuse cases in 2018.