TOKYO (AP) - Japanese Prime Minister Shinzo Abe said on Tuesday (Aug 6) that the main cause of escalating tensions between Japan and South Korea is a loss of trust over court rulings ordering Japanese companies to compensate South Koreans for forced labour during World War II.

It has insisted that the measures were related to national security concerns and were not in retaliation for the court rulings, which allowed the freezing of assets of three Japanese companies in South Korea to provide the compensation money.

Japan ruled the Korean Peninsula as a colony until the end of the war, and insists that all compensation issues were settled under a 1965 agreement normalising ties.

Mr Abe, responding to a question about the escalating tensions, urged Seoul to take appropriate actions to stop the court procedures.

His Cabinet approved a plan on Friday to drop South Korea from a list of countries granted preferred trade status on Aug 28.

"Considering the current Japan-South Korea relations, trust is the biggest problem - the question of whether to keep the promises between nations," Mr Abe told reporters in Hiroshima, where he attended a memorial marking the Aug 6, 1945, US atomic bombing.

Mr Abe said the South Korean government's refusal to interfere with the judicial system to stop the forced compensation broke the 1965 agreement and was tantamount to violating international law. 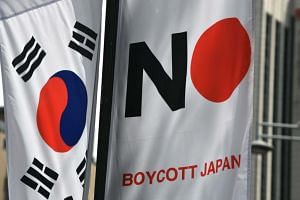 'No Japan' banners scrapped in Seoul after outcry

Mr Abe said last month that it is natural to assume that South Korea would fail export control promises because it has already broken the wartime compensation agreement.

With more than a dozen similar lawsuits pending in South Korea, the wartime labour issue could involve dozens of other companies and eventually amount to trillions of yen (billions of dollars) in compensation, and could even spread to other countries that suffered from Japanese wartime atrocities.

South Korea's government says it cannot interfere with civil lawsuits filed by individuals, and has rejected Japan's request for arbitration.

Japan announced export control measures on South Korea on July 1, and has provided inconsistent reasons for the decision, prompting suspicions that the real cause was the wartime labour dispute.

Officials have spoken of South Korean failures to keep international promises, while also saying that "certain sensitive items have been exported to (South Korea) with inadequate management by companies", while refusing to provide details.

Japanese officials denied South Korea's allegation that they are using trade to retaliate, and Mr Abe and senior ruling party lawmakers then suggested that shipments to South Korea may have illegally ended up in North Korea.

Japan then cited a loss of communication between export control authorities from the two sides for three years, accusing South Korea of failing to respond to Japanese requests for talks to provide clarifications, criticised South Korea's export control capability, and said the measure was for national security reasons.