Travellers leaving Japan will soon have to pay a "sayonara levy" of 1,000 yen ($12.20), after a departure tax was introduced in legislation passed on Wednesday (April 11).

When it takes effect on Jan 7, 2019, the new tax will apply to both Japanese and foreign travellers leaving the country by plane or ship.

Toddlers under the age of two and transit passengers leaving Japan within 24 hours of arrival will be exempted.

Local media reported that the tax is expected to add some 43 billion yen per fiscal year to government revenue.

Here are some other countries that already have a departure tax or similar fees.

Britain's Air Passenger Duty is currently among the costliest in the world.

There are two travel bands, one for short-haul flights and one for long-haul flights, where a passenger's final destination is more than 2,000 miles from London.

There are also three rates of duty in both bands, depending on the class of travel.

From April 1, 2018, those flying long-haul in economy from a British airport will have to pay £78 (S$145), while the rest in premium economy, business and first class will have to shell out £156.

Travellers taking short-haul flights would have to pay either £13 or £26. 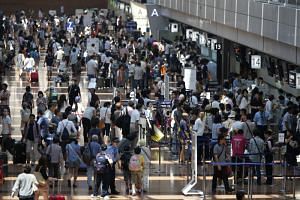 And if you are riding in style on a private jet, it will cost you a whopping £468 for long-haul destinations.

Britain first introduced the tax in 1994 as a means of paying for the environmental costs of air travel.

Australian citizens and visitors to the country have to pay a Passenger Movement Charge of A$60 (S$61) when they depart by air or sea, whether or not they intend to return.

The fee is usually added to ticket prices by airlines and shipping companies.

Children below 12 years old and transit passengers are exempted.

Those flying overseas from the United States will incur a variety of airport fees, including a passenger facility charge and a Sept 11 security fee.

The passenger facility charge costs up to US$4.50 (S$5.90) for each flight segment. This means that those who have a stopover in a second US airport before departing again, will have to pay twice. But there is a US$18 cap for those with a round trip ticket.

The security fee is US$5.60 for each one-way trip, though the fee imposed per round trip is capped at US$11.20.

Germany introduced an air transport tax in January 2011 with different rates depending on the distance of the flight and destination.

It costs between €7.50 (S$12) per passenger for short-haul journeys and more than €40 for long-haul flights.

In February, it was announced that this will be raised by $13.30 from July 1 to help fund a major airport expansion, involving the building of Terminal 5. Transit passengers will have to pay $3 more for each flight.

There is a departure tax of 700 baht ($29.40) for international destinations.

The fee also applies to transit passengers who step out of a Thai airport during a long stopover between destinations.

China charges an "airport construction fee" of 90 yuan (S$18.80) for international travellers , and 50 yuan for those flying within China.

The international departure tax applies to flights to Hong Kong as well.

Passengers holding diplomatic passports or those in transit for 24 hours or less do not have to pay the tax.