Japan's Parliament, or the Diet, enacted on Wednesday (April 11) a Bill to introduce the departure tax of 1,000 yen.

The new tax is scheduled to kick in on Jan 7, 2019, and applies to both Japanese and foreign travellers leaving the country by plane or ship. The levy will be added to airfares and ship fares specifically.

Under the law endorsed by the Upper House, toddlers under the age of two and transit passengers leaving Japan within 24 hours of arrival will be exempted.

Revenue from the tax is estimated to amount to around 43 billion yen per fiscal year, reported Jiji Press. There were about 40 million departures from Japan in 2016, including 17 million by Japanese nationals.

Seeking to capitalise on one of the few growth sectors in the rapidly ageing country, the government aims to use the extra tax revenue to boost tourism infrastructure and promote travel destinations in rural Japan, as well as fund global tourism campaigns.

According to the legislation, the government also plans to get public transportation operators to expand free wireless Internet services as well as roll out electronic payment systems. 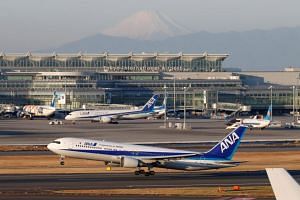 Between January and March next year, Tokyo estimates revenue from the new tax will reach six billion yen and plans to allocate part of it to the installation of gates equipped with facial recognition, reported Kyodo news agency.

On Tuesday, the Japanese Parliament passed legislation limiting the use of the departure tax revenue to tourism-related projects, countering criticism that it could be diverted for other purposes.

Japan has enjoyed a surge in the number of inbound tourist numbers, who have helped lift the world's third-largest economy in recent years.

The nation attracted a record 28.69 million tourists in 2017, up 19.3 per cent from the previous year and reflecting the sixth consecutive yearly increase, reported Japan Times.

The government of Prime Minister Shinzo Abe aims to increase that figure to 40 million by 2020, when Tokyo will be hosting the Summer Olympic and Paralympic Games, and to 60 million by 2030.

Similar departure levies are in place in countries such as the United States, Australia and South Korea: The US slaps a fee of 1,500 yen on international travellers in its visa waiver programme; Australia collects about 5,000 yen per person; South Korea imposes a 1,000 yen departure fee on air travellers.

Some critics fear the new levy could dampen the travel appetites of budget tourists.

Within Japan, the Tokyo Metropolitan Government and the Osaka Prefectural Government charge a lodging tax of 100 to 300 yen per person per night respectively to finance local tourism promotion and other measures.

Kyoto plans to follow suit from October this year.