SHANGHAI (BLOOMBERG) - Chinese trade negotiators will host their US counterparts at a landmark of jazz-era Shanghai on the city's riverside Bund, re-opening trade talks with a marked change of atmosphere after an almost three-month hiatus.

US delegates including Treasury Secretary Steven Mnuchin and Trade Representative Robert Lighthizer are set to attend a dinner at the Fairmont Peace Hotel on Tuesday (July 30) evening, according to people familiar with the matter.

The 1920s art-deco structure is among the most celebrated buildings on the Shanghai riverside, and has seen guests including Charlie Chaplin and Noel Coward when it was known as the Cathay Hotel. It played a brief role as municipal offices after the founding of the People's Republic.

Expectations for a breakthrough in the trade talks remain low. The two sides are further apart than they were three months ago, when negotiations broke down and each side blamed the other for derailing attempts to reach a deal.

China is pushing for compromise in the talks, with state media underlining this week that the US should meet it "halfway".

Since the initial tariffs in June last year, both Washington and Beijing have further raised and expanded the duties. The conflict between the world's two largest economies has also spread, dragging in companies such as Huawei Technologies Co and FedEx Corp, farmers in the Midwest, factory workers across Asia, and the World Trade Organisation.

The US delegation will stay at a separate hotel on the Bund before official trade talks at the Xijiao State Guest Hotel on Wednesday, the people said.

The "guest house" is a leafy compound of luxury reception buildings and accommodation in the west of the city. 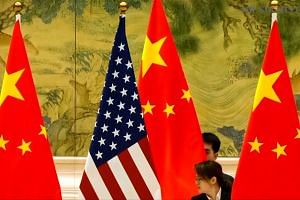 Shanghai is arguably China's commercial capital and its busiest port. The Peace Hotel's setting in the former International Settlement, which the US helped manage during a period of foreign interference that the Communist Party has vowed never to repeat, is also freighted with the complicated history of America's relationship with China.

On Tuesday, an editorial in the state-owned China Daily argued that the city was an "auspicious" venue to re-start the talks, and referenced the visit by former US President Richard Nixon there in 1972 in the course of the diplomatic thaw between the communist and capitalist states.

Among other things, the document established a working compromise on the issue of Taiwan, with the US saying it "does not challenge" the belief that both sides are part of "one China."

Taoran Notes, a blog run by the state-owned Economic Daily newspaper, has even suggested that the city could be the location for future rounds of negotiations.

"It may be just a coincidence that this round of talks is being held in Shanghai, where 47 years ago, the two sides signed the Shanghai Communique that laid the foundation for the normalization of bilateral relations," according to the editorial.

"The differences that existed then between the two countries after decades of estrangement were definitely much greater than they are today."