MACAU (REUTERS) - Nearly 20 years have passed since Portugal handed Macau over to China, and although colonial culture still infuses parts of daily life, the influence of the territory's Portuguese elite is declining rapidly as the special administrative region becomes increasingly closer to mainland China.

The authorities say they want the world's largest gambling hub to diversify into a trade and business centre for Portuguese-speaking countries including Brazil, Portugal and Angola, but there is a gaping disconnect, Portuguese residents say.

Two Portuguese top legal advisers, renowned for their expertise and training of local judges and prosecutors, were abruptly dismissed in August, far ahead of retirement age.

And legislation this year proposed Portuguese judges should be removed from sensitive cases altogether.

"They say everywhere that Portuguese are part of Macau and are always welcome, part of the history. In fact, what they are doing is not what they are saying," said Alvaro Rodrigues, a lawyer in Macau.

The removal of Paulo Taipa and Paulo Cardinal, both of whom served for more than 20 years in the government, is a bad signal, said Rodrigues, who came to Macau 28 years ago from Cape Verde, a former Portuguese colony in Africa.

The head of Macau's legislature, Ho Iat Seng, who orchestrated their dismissal, said in September it was because of "restructuring".

Ho has been touted as a candidate for Macau's chief executive in 2019. Ho and Macau's Legislative Assembly office did not respond to requests for comment.

"Both of the jurists have for the past few years been openly criticising the Macau government and stating that many of the laws that the Legislative Assembly pass violate the Basic Law," said assembly member Jose Coutinho.

For example, he said, a law on government salaries runs afoul of the Basic Law by discriminating against low-level civil servants. Like neighbouring Hong Kong, Macau operates under China's "one country, two systems" policy.

Its Basic Law is supposed to allow a high degree of autonomy and greater liberties like a free press and an independent judiciary. The legal system is broadly based on Portugal's.

But influence from the Chinese mainland is squeezing it, experts said, in an accelerated version of the scenes unfolding in Hong Kong.

"We can feel it. If you look to the legislation that has been passed in recent years, we understand that there is a big influence from the first system (China) on the second system (Macau)," said Pedro Cortes, a lawyer in Macau. 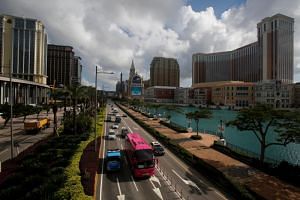 China's President Xi Jinping warns Macau, Hong Kong that they are part of 'one China'

Jorge Neto Valente, head of the Macau's Lawyers Association, said freezing out Portuguese judges violated the Basic Law and created a sort of patriotism test based on their feelings toward China.

And in the business community, many worry about increasing interference - an issue that could hurt the casino industry. Casino executives say they are closely watching what official policy will be as their licences begin to expire in 2020.

These days, the only real remaining elements of Portuguese influence are colonial architecture and its distinctive cuisine.

Portuguese and Chinese are both official languages in Macau, but there are signs that Chinese is being prioritised in government. There are no longer any Portuguese judges in Macau's criminal court, and they account for around 10 per cent of the city-state's 49 jurists.

During the trial of Sulu Sou, Macau's youngest lawmaker, and Scott Chiang on charges of aggravated disobedience, their lawyers Jorge Menezes and Pedro Leal were denied translation of a 66-page Chinese ruling.

The judge said Sou and Chiang "took the risk" of hiring Portuguese lawyers and should have considered language when making their decision.

Experts said the government was increasingly hiring only Chinese for jobs as lawyers, advisers and jurists.

Rita Assis Ferreira, a lawyer in Portugal and representative of PLMJ Law Firm in Macau, said this was part of a long-term government plan to promote Chinese policies after the handover.

"I don't see this as bad or dramatic; it's what we agreed 20 years ago with China mainland," she said.

José Luis de Sales Marques, Macau's mayor from 1993 to 2001, who now heads Macau's Institute of European Studies, was also more optimistic. He said the government supported the teaching of Portuguese, despite closer assimilation to the mainland's laws and administration.

"We have to see that there is this formula 'One Country, Two Systems' and the real meaning of that... is one country," he said. "This is the kind of realism that we have to have."