Lawmaker Sulu Sou, 26, is facing charges of aggravated disobedience during a protest against perceived conflict of interest by the Chinese-controlled territory's leader Fernando Chui.

The case has drawn parallels between Sou and democracy activists like Joshua Wong in neighbouring Hong Kong.

Sou, whose disobedience charge stemmed from an unauthorised protest outside Chui's house, has been suspended from Macau's Legislative Assembly. Sou and some lawyers say the process, in which he was unable to defend himself, violated the rule of law.

"This is a challenge for the rule of law and judicial independence in Macau," Sou said in an interview. "We haven't seen the situation this serious before."

His case marks the first time a lawmaker has been suspended since the former Portuguese colony of Macau was established as a special administrative region of China in 1999.

While some activists in Hong Kong, which Britain returned to China in 1997, have called for independence and taken to the streets to protest, there has been little public opposition in Macau over the mainland's policies in the enclave. 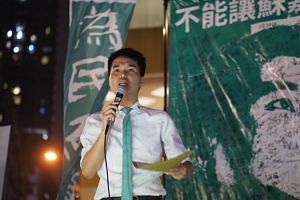 Sou has been pressing for greater government accountability as part of a broader push by the New Macau Association, a pro-democratic party made up of members mostly in their 20s and 30s, including Scott Chiang, who has also been charged with aggravated disobedience.

Since being elected a lawmaker in September 2017, Sou has been advocating for making the government more accountable and making content of official meetings public.

Vong Hin Fai, a legislator who previously acted as the campaign chief to Chui, the chief executive, has said that the assembly had voted to keep meetings private.

"We all voted and we agree on keeping the meetings behind closed doors," Vong said, according to Macau's public broadcaster TDM.

Public support for Sou and the New Macau Association has surged since last August, following the devastation wreaked by typhoon Hato, which killed at least nine people and left many residents infuriated by the government's handling of the disaster.

"We think the most important thing is the public interest and how can we do things more transparently," said Rocky Chan, a member of the New Macau Association.

Social media campaigns and public meetings around Macau have helped bolster backing for Sou and Chiang.

Both are both facing charges linked to a 2016 protest against a 100 million yuan (S$20.85 million) donation to Jinan University, which is based in the southern Chinese city of Guangzhou, by the Macau Foundation.

The New Macau Association said there was a conflict of interest since Chui was deputy chairman of the university's board and also chairman of the Council of Trustees of the Macau Foundation - a government-linked body that says it distributes to charitable, social and grassroots causes. Chui's office did not respond to requests for comment.

Sou's status as a lawmaker had given him immunity from prosecution but the legislative assembly voted to suspend him on Dec 4, with 28 of the 33 members voting for his suspension so he could stand trial.

As Sou moved to appeal against the decision to examine the legality of the legislative process, Vong and another lawmaker Kou Hoi In filed a draft resolution aimed at stopping Sou from filing the appeal. The lawmakers later withdrew their resolution in January after it garnered high-profile criticism from lawyers, including Jorge Neto Valente, president of the Macau Lawyers Association.

Valente told local media the initiative was "very bad" for Macau's political system. Sou has said there were several flaws during the secret ballot that determined his suspension on Dec 4, including stripping him of the right to defend himself, which is a fundamental right enshrined by Macau's mini-Constitution.

Macau's legislative assembly office said in an e-mail to Reuters that "all legal procedures were followed without exception".

Larry So, a political commentator and former university professor in Macau, said he saw similarities between Sou's case and the situation in Hong Kong in that he was seen as a threat by pro-establishment forces.

"They want to stamp out any fire that could possibly be lit," he said, referring to the pro-establishment camp. He added that Sou was garnering more public support, despite pressure from the government.

Sou filed an appeal to Macau's Court of Final Appeal on Feb 14 to reverse the legislature's decision. His criminal trial for aggravated disobedience will likely proceed separately but there is no date given yet.

"I can only be optimistic to face this situation. I don't have another choice," he said.