HONG KONG (BLOOMBERG) - As a top adviser to Hong Kong's government, Mr Bernard Chan is searching for any protester who can strike a deal to end more than three months of unrest.

In lunches with demonstrators and chats with friends who oppose the government, Mr Chan often hears that the protests would stop if leader Carrie Lam even met two of the five demands. But nobody he meets can guarantee him that others will stop even after she formally withdrew a bill allowing extraditions to China that kicked off the protests in June.

"You alone stopping is not enough - who am I negotiating with?" Mr Chan said in an interview on Friday (Sept 6) , before the latest weekend clashes. "I can't even convince the government to come to the table because they don't know who we're dealing with."

The lack of a clear leader is one of the main reasons the protests have carried on this long and show no end in sight. For demonstrators, that's by design: During the 2014 Occupy protests, the government was able to arrest key leaders and throw them in jail. Now the groups guard their anonymity and organise in online platforms like Telegram and LIHKG that are difficult to track.

"Some guarantees may be needed to convince protesters' delegates to show up," said Professor Jean-Pierre Cabestan, from the Department of Government and International Studies at Hong Kong Baptist University. "On the government side, there is so much foot-dragging that I am not fully convinced that they want to dialogue and much less negotiate, meaning make concessions."

The protest movement has drawn inspiration from Bruce Lee, Hong Kong's martial arts guru. Weary of following Occupy's strategy of holding ground, which led to fatigue among supporters over 79 days and turned its leaders into targets, protesters now follow the Kung Fu philosopher's advice to "empty your mind, be formless, shapeless like water."

"Now, water can flow or it can crash," Lee said in a now-famous interview. "Be like water, my friend."

Instead of a non-stop sit-in, demonstrators now organise pop-up events around the city and quickly scatter to a new location once the police use tear gas. The strategy was on display when Joshua Wong, the most prominent Occupy leader, was released from jail on June 17. On that day, protesters gathered in Admiralty, moved to police headquarters in Wan Chai and then turned to the Immigration Department building. Wong was briefly detained again this weekend.

For Beijing, the nature of the protest has made it hard to quell - and they've sought to blame foreign influences in the US and local agents. Last month, China's state-run media referred to four senior Hong Kong democrats as a new "Gang of Four," recalling allies of Mao Zedong prosecuted after his death in 1976. Then earlier this month they rounded up Occupy leaders like Wong. 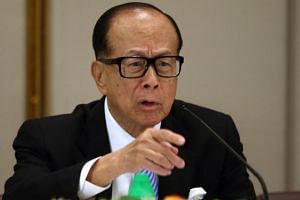 Hong Kong's Joshua Wong on way to Germany, US after brief detention

Beijing will not tolerate attempts to separate Hong Kong from China: State media

Mr Albert Ho, a former member of the territory's Legislative Council who was among those blamed by China for stoking the protests, dismissed any notion that he could influence the demonstrators.

"I hope that I could be so powerful," he said by phone. "All of this infuriates those who are in power, and they need to find an explanation and an excuse."

Hong Kongers aren't the first to eschew leadership. In a 2003 peer-reviewed article, computer scientist Simson Garfinkel traced the concept to at least the 1980s, when white supremacist Louis Beam popularised the term "leaderless resistance" in an essay. He advocated the technique for fighting state tyranny using self-organising clandestine cells, a strategy he attribute to a US intelligence officer who feared a Communist takeover of the US.

Hong Kong's protesters scored at least one victory when Mrs Lam formally withdrew the extradition law. But other demands - a commission of inquiry into alleged police brutality, retraction of the classification of protesters as "rioters," amnesty for those arrested and universal suffrage - have been rejected.

On the front lines, protesters access various cells on social media. They share photos and video in real time, allowing protesters to choose where to go as the situation unfolds.

"Many leaders just come out and they're not actually representing the voice of many protesters," said a demonstrator wearing a black gas mask who only gave his surname Wan. Standing near a bonfire on Saturday at a subway station entrance in Central, he said: "There's no room for negotiation. Most of the protesters agree with the five demands."

Mr Chan, who advises Mrs Lam's government, estimates that more than 2,000 radicals are controlling the protests, followed by several thousand more who make up a wider core. But he's only guessing. Like many in Beijing, he's unconvinced that the movement is entirely void of leadership, or at least some sort of clandestine backing, even though he has no proof.

"It's a leaderless movement, as we all say. But clearly, someone is doing a damn better job than the government or police," Mr Chan said. "I bet there's somebody, somewhere there. Whether they're foreign or not, I really have no idea. But I have to say, you cannot just say that this is just a people's movement. This has got to be way more than that."