HONG KONG - Even as the city's leader urged Hong Kongers to firmly uphold Chinese sovereignty and security on China's National Day on Monday (Oct 1), more than 1,200 pro-democracy supporters standing shoulder-to-shoulder protested against Beijing's tightening control, in a sign of the growing political divide.

In a speech at a National Day reception on Monday morning, Hong Kong's Chief Executive Carrie Lam stressed that China's sovereignty is not for negotiation.

With Hong Kong a part of China since the 1997 handover, Mrs Lam said "it is all the more important for us to uphold China's sovereignty, security and development interests".

Hong Kong has been "developing jointly and sharing prosperity" with the Chinese mainland in the past 40 years, and the city needs to better integrate into the country's overall development and make plans for the future with the support of the central government, she said in her nine-minute speech.

In the afternoon, protesters, most of whom are linked to pro-democracy groups such as Demosisto and the Civil Human Rights Front, which organised the event, chanted slogans "Don't want Article 23, defend freedom of speech!" as they marched from Causeway Bay to the government's headquarters in Admiralty.

Under Article 23 of the Basic Law, or mini-constitution, Hong Kong must enact its own national security legislation to prohibit treason and subversion against Beijing.

The controversial legislation has triggered hot debate in the city in recent months. On July 1, 2003, half a million people took to the streets in protest when the government tried to enact the Bill, which was subsequently shelved. 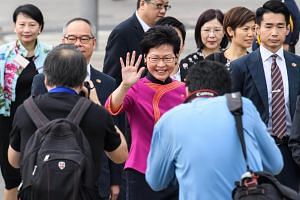 Pan-democrat lawmaker Au Nok Hin, who is also convenor of the Civil Human Rights Front, told The Straits Times that the government is trying to use national security as a justification to "eliminate the freedom of Hong Kong, including the freedom of society" through Article 23.

Last week, the Hong Kong National Party, whose declared goal is to turn Hong Kong into a republic, was banned on the ground that it was a threat to national security. It became the first political party to be banned after 1997.

Following the ban, Beijing and pro-establishment lawmakers renewed their calls for Hong Kong to enact the controversial national security law.

The government's move has also raised fears that other groups such as the Hong Kong National Front, Hong Kong Indigenous and Demosisto may be next in line.

Pro-democracy activist Joshua Wong of Demosisto told ST: "We organised this (the protest)... to send a clear signal to Beijing (that) National Day is not the time for celebration. Under Chinese President Xi Jinping's hardline policy towards Hong Kong, Demosisto might be the next political party or activist group to be banned, but if they decide to ban us, they need to pay the price."

Protest organisers in a statement also called for greater accountability from the government and criticised the administration on a wide range of issues including suppression of freedom of association and speech, as well as safety issues arising from a scandal over shoddy work on a railway link.