SINGAPORE - Huawei's founder on Monday (June 17) cut the firm's revenue forecast for this year by 20 per cent, saying that he had under-estimated the extent of sanctions imposed by the United States.

"We had not expected the US to be so determined and firm in attacking Huawei," said Mr Ren Zhengfei, founder and president of the Chinese telecoms equipment giant during a panel discussion in Shenzhen that included two American tech experts, George Gilder and Nicholas Negroponte.

Speaking in Mandarin, Mr Ren said Huawei would cut production by about US$30 billion ($41.1b) in the next two years and that revenues would drop to US$100 billion annually in the same period.

The Shenzhen-based firm posted a revenue jump of 19.5 per cent to US$107 billion last year and had earlier said that it expected earnings for this year to climb to a record high of US$125 billion.

Mr Ren also confirmed an earlier report that Huawei's overseas mobile phone sales was set to drop by 40 per cent. But the Chinese market is still growing very quickly, he said.

The top Huawei official said he did not think that the US would hit out at his company on so many fronts.

"Beyond attacking the supplies of parts, it also bans us from taking part in many international organisations, prevents us from increasing cooperation with universities and we can't use anything with US content..." he said during the nearly two-hour panel discussion which was streamed live on the Internet.

Huawei was accused of spying and stealing intellectual property amid an escalating trade war between the US and China. Last month, US President Donald Trump put the Chinese telecoms giant on an "entity list", which bans American companies from doing business with the firm without government approval. 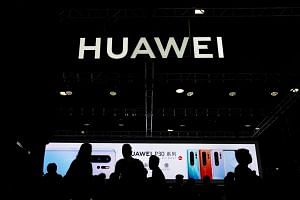 Huawei is a symbol of China's pushback against the US

In the face of those curbs, Mr Ren said that in the next two years the firm would have to make a lot of adjustments in switching its systems.

He provided no specifics but said that once all was done the firm would "become stronger". He expected Huawei to resume growing strongly by 2021.

"We believe that these things cannot stop us from moving forward," he added.

He noted that Huawei had always enjoyed the support and cooperation of many advanced companies around the world over the past 30 years.

"Some of the setbacks we are seeing now are not caused by these companies, but rather by certain politicians' different perceptions about things," he said.

Mr Ren stressed that there were no backdoors in Huawei's telecoms equipment and reiterated earlier comments that the firm was happy to sign a no-backdoor agreement with any country that wanted to do so.

During the discussion, Mr Negroponte said that he did not think that the current Huawei clampdown was about concerns over national security.

"Our President has already said publicly that he would re-consider Huawei if we can make a trade deal," said the former Massachusetts Institute of Technology professor. "Clearly it's not about national security, we don't trade national security."

"So it's about something else and this trade war has got to end. And that I believe will end sooner rather than later," he added.

During the question and answer session, Mr Ren assured that he would not use the more than 50,000 Huawei patents as "weapons" but he did not rule out seeking licensing fees for usage.

And it seems the firm has already started doing so. Last week, the Wall Street Journal reported that Huawei had asked Verizon Communications, an American mobile operator, to pay more than US$1 billion in licensing fees for more than 230 of its patents.

Mr Ren also stressed that Huawei would continue to press on with research and development despite the current setbacks and will not reduce its workforce substantially.

"For now, Huawei happens to be leading in the 5G (mobile technologies), we cannot be complacent, and we must still cooperate with others," he said.

Mr Ren also said there would be no winners if US and Chinese technology supply chains were to decouple.

"Both sides will be hurt, no one side will benefit," he said.