BEIJING - China has slammed Canada's treatment of Huawei chief financial officer Meng Wanzhou as "inhumane" and a "violation of human rights", intensifying pressure just hours ahead of her appearance at a bail hearing in a Canadian court.

In a regular press briefing on Monday (Dec 10), foreign ministry spokesman Lu Kang said Canada did not notify the Chinese embassy in Ottawa after it arrested Ms Meng on Dec 1, flouting a consular treaty between the two countries that requires it to do so.

Ms Meng, 46, the daughter of the Chinese tech giant's founder, is facing extradition to the United States for allegedly misleading banks over Huawei's connections with a subsidiary, SkyCom, which had sold telecom equipment to Iran in breach of US sanctions.

Citing media reports about the mistreatment of Ms Meng in custody, Mr Lu said denying her of medical provisions were inhumane and infringed on her rights.

The nationalistic Global Times on Sunday reported that Ms Meng had been "subjected to rude and degrading treatment" by the Canadian authorities, who had handcuffed her at the airport and made her wear ankle braces when she was taken away after her first bail hearing last Friday.

"In the absence of a conviction by trial, Meng was put into restraining devices used on felons. Treating her as a prisoner is not only degrading, but is also a violation of her basic human rights," said the state-controlled tabloid.

The daily also claimed Ms Meng, who had undergone surgery in May to remove her thyroid gland and also requires daily medication for hypertension, was not given medical care. 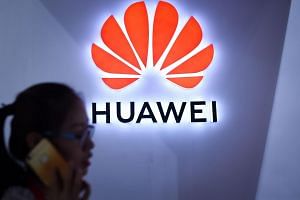 China summoned the Canadian ambassador on Saturday to protest Ms Meng's arrest, warning of "grave consequences" if she is not released. The US envoy in Beijing was also called in on Sunday and told to withdraw the arrest warrant issued by a US court.

When asked on Monday what were the severe consequences Beijing had warned of, Mr Lu said "it depends entirely on Canada".

The Canadian embassy in Beijing did not respond to queries by The Straits Times on Monday.

Ms Meng is due to appear in court on Tuesday morning to seek bail. In papers filed by her lawyers, Ms Meng argued that her multiple health issues - she had survived thyroid cancer and suffers from severe hypertension and sleep apnea - require daily medication and care.

"I continue to feel unwell and I am worried about my health deteriorating while I am incarcerated," she said in the papers.

"I currently have difficulty eating solid foods and have had to modify my diet to address those issues. My doctor has for years provided me with daily packages of medications."

She also emphasised her close ties to the Canadian city of Vancouver, where she was arrested more than a week ago while transiting at the airport. She and her husband own at least two properties there, which she has offered to post as part of her bail.

The fracas has sent jitters across stock markets. Financial markets in Asia started the week poorly on the back of US-China tensions which have ratcheted up after the arrest, and questions over whether the trade dispute between the two biggest economies could be resolved within the next three months.

US Trade Representative Robert Lighthizer said on Sunday that the US will bring on new tariffs if talks between the two countries do not conclude successfully by March 1.

Keen to reach a deal, Beijing has tried to keep its trade feud with the US apart from the Huawei matter.

On Monday, it said trade negotiators from both sides are ramping up discussions and that it hopes to resolve the conflict.

But Huawei was dealt another blow on Monday after Japan banned the Chinese firm from government purchases on security fears, while the country's top three telcos are said to follow suit.

When asked, Mr Lu said China has repeatedly requested that Japan treat Chinese companies fairly and in a transparent manner without discrimination.

"China will pay close attention to the Japanese government's implementation of this regulation."