Banning face coverings in public is not new.

Many other places around the world have banned face coverings - the law was cited in the United States during the 2011 Occupy protests, and during the Yellow Vest protests in France this year.

Here are some countries that have banned face coverings:

After several high profile protests, Canada enacted a law in 2013 banning masks during a riot or unlawful assembly. The law also covers those who commit offences while wearing any disguise and is punishable by up to 10 years in prison.

Following months of violent "yellow vest" protests this year, the government implemented an "anti-troublemakers" law which made it a crime for protesters to conceal their faces. Violators face up to a year in prison.

Masks are legal in Australia, but in Melbourne, police can direct a demonstrator wearing a mask to leave a protest area if it is clear the demonstrator is wearing the mask primarily to conceal his or her identity or as protection against crowd-controlling substances like tear gas. Those wearing masks who refuse to leave can be charged.

In Germany it is illegal to disguise your identity in public meetings and demonstrations. The 1985 law is to ensure that police are able to identify you.

Violators can be fined or imprisoned for up to one year.

Since 1845, more than a dozen states have used mask ban laws to prosecute political protesters. In the 20th century, the law was used to stop the violent actions of the hooded Ku Klux Klan.

More recently, the law was used against people taking part in the Occupy protests.

These laws have frequently been challenged on the grounds that they violate the freedom of speech laws in the Constitution.

Punishment varies from state to state - from one year to 12 years in prison.

Italy banned any attire that could hide a person's face in public in 1975.

The initial purpose of the law was to prevent terrorism and crime. 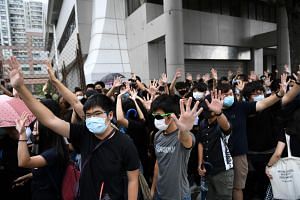 In Hong Kong's crackdown on protests, face mask ban may be the start

There are exceptions for a justified cause, but there are disagreements on whether religion is one such cause.

Violators can be fined or imprisoned.

Russia banned all masks and any other means of hiding identity during public events in 2012.

The organisers of any event or gathering must ensure that all participants refrain from disguising themselves. Violators face a fine of up to 10,000 roubles (S$200).

The use of face masks during public gatherings is regulated in Singapore.

Under the Public Order Act, the wearing of masks, visors and helmets in any public assembly or procession here is subject to the approval of the Commissioner of Police.

He and nine others were arrested that evening, with several of them found in possession of Guy Fawkes masks.

Lau, who had set up the march without a permit, was fined $1,000 for his offence under the Public Order Act.

Banks here typically have their own rules regarding the wearing of masks, visors and helmets in their premises. For identification purposes, patrons may be asked to remove any device covering their face, especially when such accessories are not religious.