Police fired multiple volleys of tear gas in several locations on Hong Kong Island and in Kowloon to disperse protesters, as thousands took to the streets to protest against a new law that bans face masks during demonstrations.

Several rounds of tear gas were fired at a group of protesters on Hennessy Road who were throwing bricks at riot police, local media Apple Daily reported. Police also fired tear gas in the streets of Wan Chai to disperse protesters.

Several black-clad protesters were subdued by riot police in Wan Chai as well as Causeway Bay, according to TV footage.

Water cannon trucks and police armoured vehicles were spotted on Harcourt Road in Admiralty, according to broadcaster TVB.

In a statement, police said that protesters have been participating in unlawful assemblies, blocking major roads at multiple locations.

"Police will soon conduct dispersal operations on Hong Kong Island and warn the protesters to stop all illegal acts and leave immediately. Members of the public are advised to stay indoors and keep their windows shut," the statement said.

Violence also broke out in Sham Shui Po, where a man, believed to be a taxi driver, was beaten up by a group of protesters after being dragged out of his vehicle, broadcaster RTHK reported. The man suffered head injuries. It was not clear what had happened before the assault.

In another incident, at least one journalist was burned after catching fire after being caught in a petrol bomb explosion. Pictures doing the rounds on social media show a journalist with his head on fire. The fire was reportedly extinguished within a few seconds.

RTHK confirmed that the reporter who got hit by the petrol bomb was a journalist with the public broadcaster’s TV section.

“Video footage showed that his poncho caught fire and burned close to his ears. He has been sent to Ruttonjee Hospital for treatment,” RTHK said.

A Bank of China outlet in Causeway Bay damaged by protesters

Earlier in the afternoon, a heavy downpour did not stop thousands of Hong Kongers from taking to the streets, as they heeded online calls to protest against the newly introduced ban of face masks during demonstrations.

The protest march's starting point outside Sogo department store in Causeway Bay was a sea of umbrellas. Many protesters turned up wearing surgical masks or using other items such as towels or party masks to cover their face, despite a mask ban that has come into effect since Saturday. Surgical masks were also given out along the march route from Causeway Bay to Central.

Hong Kong's Chief Secretary Matthew Cheung wrote in a blog post on Sunday that the current "precarious situation", which endangered public safety, left no timely solution but the anti-mask law. He urged people to oppose violence ahead of grassroots district council elections set for Nov 24.

In their mass SMS warning to members of the public, police said that "unauthorised public events expected today will likely cause violence and disruptions". They also advised people to stay alert and avoid going out.

Shortly after the march kicked off around 2pm on Sunday under intense shower, the Hong Kong government issued a statement, saying that the large group of protesters are blocking the carriageways in Hennessy Road near Yee Wo Street and seriously paralysing the traffic.

The government warned that the protesters were participating in an unauthorised assembly, which is an illegal act.

"Police express the strongest condemnation against these acts, which endanger the safety of road users," another statement said.

It added that the acts may constitute unlawful assembly or loitering, and offenders, upon conviction, are liable to imprisonment of five years and two years, respectively.

More metro stations were shuttered on Sunday afternoon, after several were vandalised and trashed by protesters. Stations that have shut included Mong Kok, Yau Ma Tei, Kowloon Tong and Lai Chi Kok, adding to the nearly half of the MTR stations citywide that had remained closed on Sunday morning.

The metro system partially reopened on Sunday morning after it was completely shut the day before in an unprecedented shutdown.

In an early morning statement, the Transport Department said that some MTR stations remain closed due to "serious damage". Many of those stations had been torched and trashed by protesters during violent demonstrations across the Asian financial centre on Friday night against the mask ban.

Rail operator MTR Corporation said the stations were closed, as it needed time to repair the damaged facilities. 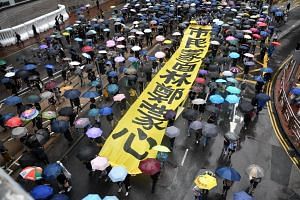 Most of the stations that remain closed are also close to protest targets, including government offices and police stations. The shuttered stations included Admiralty, Mong Kok and Causeway Bay, in the heart of its shopping district. The line serving Disneyland has also been shut.

In total, 45 out of 93 MTR stations were opened on Sunday morning, but services will end at 9pm, more than three hours earlier than normal, to allow time for repairs to be carried out.

Meanwhile, the express train connecting the city centre to the airport will run normally through 1pm, when the service will be limited to just the airport and the Hong Kong station, without stopping at other sites following a government request, MTR Corporation said.

On Sunday morning in the residential Tin Hau district, where the MTR remains shut, shops were mostly open with families queueing at eateries. Under an overcast sky, many were also seen at the nearby Victoria Park.

Malls and shops around the city, including Sogo department store, Fashion Walk and World Trade Centre in Causeway Bay as well as the IFC mall in Central, remained closed on Sunday, RTHK reported.

Pro-democracy lawmakers were seeking an emergency injunction on Sunday in a bid to overturn the face mask ban and declare the emergency powers invalid because they bypass the city's legislature.

The ban was welcomed by government supporters and Beijing. But opponents and protesters saw it as the start of a slippery slope tipping the international finance hub into authoritarianism.

All 24 pan-democratic lawmakers have filed the application for the injunction, broadcaster RTHK reported. 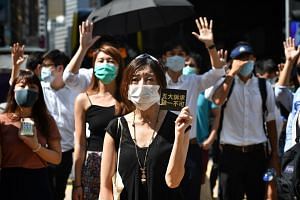 "I would say this is one of the most important constitutional cases in the history of Hong Kong," lawmaker Dennis Kwok told reporters outside the court on Sunday.

"This could be the very last constitutional fight on our part. In the name of law, they are trying to hurt the people and they try to crush the opposition," he said. "If this emergency law just gets a pass just like that, Hong Kong will be deemed into a very black hole."

RTHK reported that the High Court had rejected the application for the interim injunction against the mask ban.

It was the second rejection in three days. Former student leader Lester Shum and retired civil servant Kwok Cheuk Kin on Friday filed judicial challenges against the mask ban at the High Court, but the judge declined to grant any temporary suspension, minutes before the regulation came into effect on Saturday.

Mr Shum and Mr Leung had argued that the mask ban would constitute "disproportionate interference" with the right to peaceful assembly and the freedom of expression, RTHK reported.

Meanwhile, the Hong Kong Monetary Authority on Sunday rubbished rumours about the authority implementing a new regulation to cap the daily amount of cash withdrawal from banks.

Describing the rumours as "totally fake and unfounded", the authority stressed that the Hong Kong banking system is robust and sound. "Banks have sufficient supply of banknotes to meet the needs of the public," it said.

The authority also urged the public "to be vigilant about malicious rumours and verify information carefully".

The "extreme violence" from the night before justified the use of the law, said Mrs Lam in a recorded video address on Saturday surrounded by her de facto Cabinet. 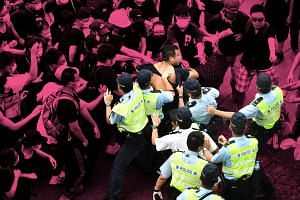 In an unprecedented move, MTR Corporation on Saturday shut the entire rail network citing excessive damage, but the Airport Express resumed service in the afternoon. The operator's closure had largely paralysed most of the city, with its network typically carrying about five million passengers a day.

Thousands defied the ban on face masks and took to the streets across the city, marching from the shopping district of Causeway Bay to the Central business district.

The anti-mask move by the government, which came into effect on early Saturday, has led to tensions soaring in the city.

The former British colony has been roiled by increasingly violent protests for four months, which began in opposition to a Bill that would have allowed extradition to mainland China but have spiralled into a broader pro-democracy movement.

WITH REPORTING FROM AGENCE FRANCE-PRESSE, BLOOMBERG AND REUTERS