The lessons of that agitation appear to have made the city's protesters swifter and better prepared in some of their latest attempts to weather police action.

The young citizens who crowded into the streets this week to protest against a Bill that would allow extradition to mainland China used the Telegram encrypted messaging app to share locations.

They handed out surgical masks for protection against pepper spray and to hide their faces from the police. They turned cars and trucks into roadblocks in the middle of highways. And they set up supply stations throughout the demonstration, acting more quickly than they did five years ago.

"It's a real genius of Hong Kong people," said Mr Kong Tsung-gan, author of Umbrella: A Political Tale From Hong Kong. "There are no pre-existing structures and before you know it, they're there."

At the same time, Hong Kong's police also appeared better equipped in their efforts to disperse the crowd - and more determined to prevent a repeat of 2014's extended sit-in.

In full anti-riot gear, they used pepper spray and fired rounds of tear gas, rubber bullets and bean bags, making it harder for demonstrators to hold their ground. The police said they fired about 150 rounds of tear gas in Wednesday's melee, almost double the 87 rounds fired in the entirety of the Umbrella Movement.

Here are some of the tactics Hong Kong's protesters used in this week's protests:

While a pro-democracy group called the Civil Human Rights Front helped run the movement against the Bill, there were no obvious leaders at Wednesday's protests. 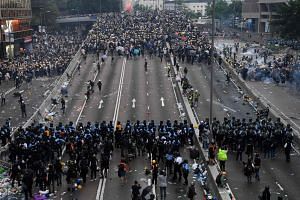 Student activist Joshua Wong, one of the most public faces of the 2014 protests, is currently in jail in Hong Kong.

A lot of demonstrations appeared to be initiated by individuals organising friends and acquaintances via instant messaging.

That was intentional: Any gathering of three or more without police consent could be seen as unlawful assembly, according to local law.

Telegram founder Pavel Durov said his messaging service had seen a massive cyber attack which originated in China, raising questions about whether Beijing had attempted to derail the demonstrations.

"You must wear a mask to protect yourself if you are going out there," a young man told commuters outside the packed Admiralty subway station, the nearest one to the Legislative Council building. He was among a few others handing out masks to the demonstrators. 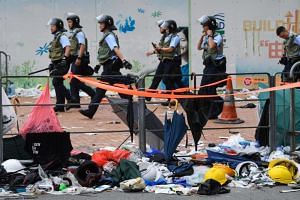 Many of the protesters, dressed in black or white, had their masks on to make themselves less recognisable for potential prosecution. Some wore goggles to protect themselves against pepper spray and tear gas.

"This time around, we have experience, so we know what we can do," said protester Auyeung Tung, 40, a performance artist.

Protesters appeared to almost instinctively know what they needed as they occupied certain roads, thanks to their 2014 experience.

Within hours, multiple supply stations were loaded up with surgical masks, umbrellas, bottled water and cling wrap, further preparing demonstrators for pepper spray and tear gas. There were also plastic cables, masking tape and gloves for building roadblocks. Food, from biscuits to bread, was stocked up.

Demonstrators formed human chains to distribute supplies from one part of the protest to another and to deliver parts of barricades used to ward off police. They also set up recycling and first-aid stations.

As the crowd grew, demonstrators turned several barricades into staircases for people to climb onto the highway.

After the protesters had dispersed, Hong Kong woke up on Thursday (June 13) to a city where most roadblocks had been cleared and traffic starting to move normally.

Cars, trucks and even a bus on Wednesday suddenly stopped on major roads leading towards the protest zone, likely in response to an online campaign asking drivers to "create friendly car crashes" to block roads.

At least 10 private cars stopped in the middle of Queensway, a key avenue in the heart of Hong Kong's Central business district.