HONG KONG (REUTERS) - Hong Kong police loosened guidelines on the use of force by officers in the run-up to demonstrations on Oct 1, giving them greater power to deal with protesters in difficult situations, according to documents seen by Reuters.

In the documents, the police manual changed some guidelines on how officers could act when considering force and also removed a line that stated officers should be accountable for their actions.

On Tuesday, the 70th anniversary of the founding of the People’s Republic of China, officers deployed a record level of force and firearms, including firing about 1,400 rounds of tear gas, 900 rubber bullets and six live rounds.

More than 100 people were wounded in the turmoil, as anti-government demonstrators took to the streets across the Chinese-ruled territory, throwing petrol bombs and attacking police.

For the first time in the latest wave of protests, a demonstrator was shot by live fire.

In the documents seen by Reuters, the police manual changed some guidelines on how officers could act when considering force.  The updated guidelines also removed a line that said “officers will be accountable for their own actions”, stating only that “officers on the ground should exercise their own discretion to determine what level of force is justified in a given situation”.

Civic Party lawmaker Tanya Chan said that change was significant.  “By deleting this line, it gives the impression that the police force will support officers in whatever they do,” she said.

When facing “Defensive Resistance”, officers are advised to consider new methods, including tear gas and pepper spray, according to the documents.

Officers should also consider using additional actions such as rubber bullets, water cannon with tear liquid and bean bag rounds against any cases of  “Active Aggression”. 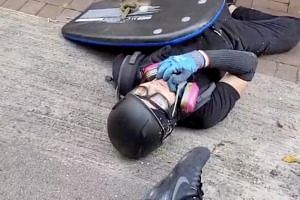 More come out in support of Hong Kong's embattled police

Local media Now TV and Cable TV also reported on changes to the police force’s procedures manual, which they said took effect on Sept 30, ahead of protests on China’s National Day.

Reuters could not confirm when the changes were made.  The police declined to comment when asked if amendments had been made.

“The guidelines on the use of force involve details of operation. It may affect the normal and effective operation of the police force and work of police on crime prevention if details are made public. Therefore, it is not suitable to make it public,” it said in a statement to Reuters.

The changes come amid accusations that police have used excessive force to handle protests that have roiled the financial centre for nearly four months.  Amnesty International last week urged the Hong Kong government to investigate police use of force, and to encourage Beijing to safeguard protesters’ right to peaceful assembly.

Police say they have shown restraint in the face of increased violence.

Protesters clashed with police into the early hours of Thursday, throwing petrol bombs and venting their anger over the shooting of a teenager earlier in the week.