HONG KONG (NYTIMES, BLOOMBERG) - Typhoon Mangkhut battered Hong Kong and threatened the southern coast of China on Sunday (Sept 16), after cutting a destructive path through the Philippines and killing dozens of people there.

The storm had weakened overnight but was still a severe typhoon, with gusts of up to 160mph (257kmh), Hong Kong authorities said. Buildings in the city swayed, trees were downed, windows shattered and hundreds of flights were cancelled.

Hong Kong is used to fierce storms, but as Typhoon Mangkhut began battering the city on Sunday, this one felt different. Wind gusts as strong as 160mph swept through the city’s canyons of tall buildings, and fuelled storm swells that threatened the coastline with waves as high as 40 feet (12m).

At midday, the city’s normally teeming streets were devoid of people and cars. The weather authority issued its highest typhoon warning – a signal 10. For the first time ever, Macau, the Asian gambling capital farther along the Chinese coast, closed its casinos because of a storm.

Hong Kong residents hunkered down in their apartments, having cleared many grocery-store shelves the day before in preparation for the typhoon. Others took refuge in shelters.

The city’s airport, a central transit point for much of Asia, was virtually shut down, with 543 flights cancelled, disrupting nearly 100,000 travellers. The outdoor sections of the city’s vaunted subway system were taken out of service.

Some people relished the excitement. A father and son ran around the block in undershirts and flip-flops, laughing. “We wanted to watch the wind,” the father said.

“It’s a spicy thing for holidays,” said Zafer Topkan, a tourist from Austria. “We just wanted to do sightseeing, but the typhoon is a special thing that not everyone can see or feel.”

As the storm bore down, Hong Kongers took to Facebook and Whatsapp messaging groups, circulating pictures of the hurried preparations: cars and motorcycles mummified with cling wrap, indoor storefronts encased with spiderweb-like tape. One Instagram user Photoshopped Spiderman onto the side of a Hong Kong building, where he had pitched in by putting tape on a window.

Guangdong, China’s most populous province, has extensive experience with typhoons, and makes elaborate preparations for each of them. Evacuations of low-lying areas are mandatory. Fishing vessels are ordered into well-protected anchorages. After 16 workers were killed when their shanty collapsed in a typhoon in 2003, the province pursued a strenuous campaign of demolishing or upgrading substandard housing.

The Pearl River Delta area, which also includes Hong Kong, is one of the world’s most important manufacturing hubs and home to more than 60 million people.

Hong Kong itself is quite resilient to typhoons. Although heavy rain may trigger landslides, the former British colony is not especially vulnerable to flooding because it has few low-lying areas.

The sprawling river delta around it, however, is barely above sea level and has struggled with flooding despite years of investment in drainage systems. Climate change has exacerbated the problem. The provincial capital, Guangzhou, has more to lose from rising seas and more severe storms than any other city on the planet, according to a World Bank report.

In Zhanjiang, a coastal city of 8 million on the storm’s path near Maoming, workers were boarding up storefronts on Saturday, while residents crowded supermarkets and emptied some of them of water, rice and packaged noodles.

At Yugang Beach, along a bay near the city centre, a loudspeaker warned bathers to stay out of the water because of the “influence of the typhoon”, though few seemed concerned given the blue skies and warm temperatures. A woman selling chilled coconuts said she would simply stay home on Sunday.

Beside a rusting ferry ship nearby, groups of young men collected sand into large nylon sacks. One of them, Mr Liang Jiawei, said they intended to use the improvised sandbags to brace the glass windows at the real estate office where they worked. 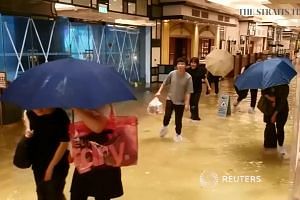 They recalled that Typhoon Mujigae, the last major typhoon to strike the city, in 2015, killed at least 11 people. “People have been preparing ahead of time because three years ago people were not prepared well,” Mr Liang said.

Provincial authorities have issued a video on social media showing footage of the previous typhoon and warning people not to take any chances.

Economic losses in Hong Kong and across China could reach US$50 billion (S$69 billion) on top of the US$16 billion to US$20 billion it probably exacted in the Philippines, said Mr Chuck Watson, a disaster modeller for Enki Research in Savannah, Georgia. The impact in the Philippines could be between 5 and 6 per cent of its gross domestic product.

Chinese State Councillor and Foreign Minister Wang Yi postponed his Sept 16-18 visit to the Philippines in the aftermath of the storm. The South-east Asian nation's foreign affairs department said it is now focused on coordinating offers of international humanitarian assistance.

Throughout the region, airlines had cancelled at least 1,339 flights through the next 48 hours, according to FlightAware, a Houston-based tracking service.

Mangkhut could affect as many as 30.5 million people across Asia, according to the United Nations Global Disaster Alert and Coordination System.