HONG KONG (BLOOMBERG) - Like many expatriates in Hong Kong, Madeline Bardin is thinking more and more about leaving.

The 36-year-old entrepreneur has thrived in the city for seven years, but she worries that its summer of unrest isn't going away anytime soon. She won't go outside with her 8-month-old son without first checking chat groups and the news for reports of tear gas, and she recently cancelled a business trip on concern that protests at the airport might prevent her from returning home.

"We have a young family to think about and we think this is just the beginning of the changes in Hong Kong," said Bardin, who moved to the city from London in 2012. "Long term, it just doesn't make sense for us to stay here with the rising instability."

Hong Kong's ability to assimilate people from around the globe has helped turn the former British colony into one of the world's biggest financial and commercial hubs. But that status is increasingly under threat as expats and their employers weigh the costs of committing to a city mired in its worst political crisis since the handover to China in 1997.

If people like Bardin decide to leave, it could do significant damage to an economy that hosts the world's fourth-biggest stock market and regional offices for hundreds of foreign companies.

Just a few hours after the Fitch statement on Friday, police used tear gas in a populated area to disperse protesters who dismantled traffic lights and started fires. On Saturday, protesters blocked a main road in Mong Kok, a busy shopping and residential district, and burned a barricade near the police station before being chased off by hundreds of riot cops.

Hong Kong has long attracted international bankers, lawyers and other professionals with its energetic urban lifestyle, negligible crime rate and low taxes - a combination that convinced expats to stomach sky-high rents and cramped living spaces. At the end of 2018, the territory had more than 650,000 foreign residents, in addition to the more than 1 million people from mainland China who have settled in the city of 7.5 million since 1997.

While Hong Kong's government doesn't publish comprehensive immigration statistics frequently enough to gauge the full impact of this year's unrest, there are signs that foreigners are cooling on the city. 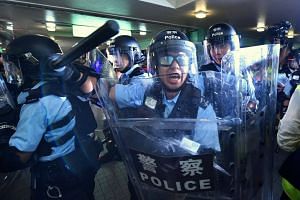 Applications for general employment visas dropped 7 per cent in August from a year earlier, after rising on an annual basis for most of 2019, according to official figures. The number of mobile residents - those who recently spent between one and three months in the city - fell 4.1 per cent in the first half, the biggest decline in a decade.

Online forums now often feature expats debating whether to leave Hong Kong to give birth, whether it's safe to let their kids take mass transportation, and whether to move out of the city for good. Many worry that Beijing is chipping away at the "one country, two systems" framework that gives Hong Kong certain freedoms unavailable in Communist China. The extradition Bill would have exposed both Hong Kongers and foreigners to the risk of being sent to the mainland to face what the US State Department has called China's "capricious" legal system.

Hong Kong's status as "Asia's World City" was based on "values that are eroding quickly as Beijing exerts more and more influence in Hong Kong, especially in recent years," said Lo Kin-hei, vice chairman of Hong Kong's Democratic Party. "If these values are gone, those names and status Hong Kong enjoys now will be gone forever."

For all its challenges, Hong Kong has plenty of foreigners committed to the city for the long haul. Several foreigners have been notable fixtures at the demonstrations, offering support to protesters, live-streaming clashes with police on Twitter, and in at least one case drawing the ire of pro-Beijing lawmakers.

Others are reluctant to leave for economic reasons. In a survey of 982 Filipino domestic helpers conducted by HelperChoice, a recruitment platform, 45 per cent said they were worried about the protests but not enough to leave Hong Kong, where salaries are often far higher than in their home country, the South China Morning Post reported.

While Hong Kong did return to normality soon after the Occupy Central movement fizzled in 2014, this year's demonstrations have had a more dramatic impact. Not only have they spilled from the city's streets into the airport, subways, shopping malls, and schools, they also threaten to tip the economy into a recession as retail sales and tourism plunge. 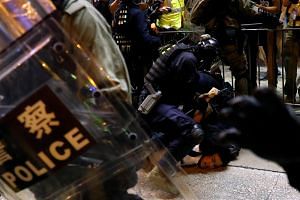 Fitch downgrades Hong Kong for first time since 1995 on turmoil

The outlook could get worse if the trend toward increased violence by some protesters persists. Hong Kong's government hasn't ruled out invoking the city's emergency law, which could allow it to disrupt Internet service and seize property. Meanwhile, China has signalled repeatedly that it could send in the People's Liberation Army if necessary to quell the unrest.

Professionals who moved to Hong Kong from mainland China share many of the same concerns about stability as Western expats. But some are also souring on the city for different reasons.

One common gripe is that native Hong Kongers have become less welcoming to people from the mainland as the protests have escalated. A Chinese banker who has lived in the city for almost a decade, and who asked not to be named discussing a sensitive issue, said his wife has ordered him not to speak Mandarin in public. The couple had planned to retire in Hong Kong, where locals speak Cantonese, but are now considering Shenzhen instead.

Jason Tan, a director at recruitment agency Kelly Services in Shanghai, said he's fielding as many as 20 calls a day from financial professionals who've been in Hong Kong for a few years, but now want to move back to China. "Candidates are looking for greener pastures," he said.