In a city with a reputation for cut-throat competitive focus, residents said the storm had provided a rare opportunity for solidarity.

Hong Kong escaped without any fatalities when the storm hit on Sunday. But more than 300 were injured as buildings were rocked, windows smashed, coastal areas pounded by towering waves and more than 1,000 trees were felled.

By Tuesday morning, there was still extensive damage and debris across the city.

In the seafront eastern residential neighbourhood of Tseung Kwan O, around 40 local volunteers set to work.

The community, stacked with tower blocks, was mauled by winds and waves which tore up paths and roadways on the coastal promenade.

Teacher Simon Ng brought his two young daughters down to help with the clean-up. 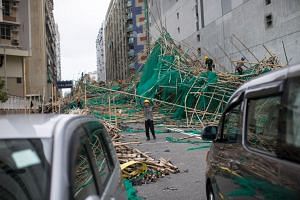 "I would go out here for jogging, bring my kids here to play. Now it looks like a post-war situation," Ng told AFP.

He said he hoped his children would learn about community spirit by helping out.

"I hope for them to have a sense of civic consciousness about our public places," Ng said.

Refugees and asylum seekers are marginalised in Hong Kong, unable to work or even volunteer legally.

In the district of To Kwa Wan - home to many low-income families - a group of around 25 ethnic minority residents, asylum seekers and refugees helped cleaners who were overwhelmed with the amount of work.

"A lot of refugees wanted to do it because they've got no work and said 'this is our city too'," said Jeff Andrews, social worker for refugees with NGO Christian Action, which organised the group.

Community group Fixing Hong Kong, which also operates in To Kwa Wan to help needy residents with household repairs, said it would focus on helping those who live in flimsy rooftop shelters that had been damaged.

In the seaside village of Shek O, which has a mix of local and expatriate residents, volunteers have been clearing roads, bagging up debris and taking washed-up sand in baskets back to its popular beach.

The village was pounded by fierce waves that left boats driven inland including on its famous golf course, which disappeared underwater.

Resident Jennifer Pollard said it was the worst storm she had seen in 19 years of living there.

"When a crisis comes like this, it doesn't matter about language or lineage - everybody was helping," said Pollard.

"Like every major event, it will blow over, but hopefully people will stay community-orientated for longer," she added.