HONG KONG (BLOOMBERG) - Hong Kong said it would make further amendments to scale back a proposed extradition law that has raised concerns over the city's autonomy and risks undermining its status as an international trade hub.

The government will raise the proposed extradition limit to crimes that carry a maximum sentence of seven years in prison - up from a maximum of three years - the city's security secretary John Lee said at a news conference on Thursday evening (May 30).

He also said Hong Kong will amend the Bill to consider extradition requests from China only if they are made by the central authority of the requesting jurisdiction, rather than handing that power to provincial or municipal authorities.

The amendments came less than a day after pro-establishment lawmakers suggested the government make the changes.

The government has rejected alternatives offered by pro-democracy lawmakers and academics in the past month.

The concessions come after widespread public opposition to the Bill, including mass protests, and growing concerns from the business community. 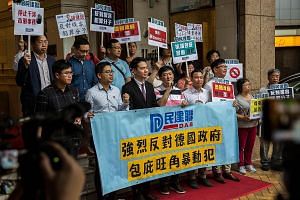 Hong Kong's legislature is debating the proposal to allow extraditions to places such as mainland China, Macau and Taiwan.

Critics say it could open the door to Hong Kong citizens and foreigners being prosecuted by Beijing, and further erode the city's independence.

Chief Executive Carrie Lam has defended the proposal, saying it is needed to bring fugitives to justice. Her government is working to pass it by the end of the current legislative period in July.

In response to criticism from the business community, Mrs Lam in March removed nine categories of business-related crimes from the potential offences eligible for extradition.

"I sincerely hope various stakeholders can engage in rational and pragmatic discussions over the amended bill," she told reporters Friday, adding that the new concessions hadn’t been made in favour of any particular group.

In a joint statement on Thursday, British Foreign Secretary Jeremy Hunt and Canadian Minister of Foreign Affairs Chrystia Freeland said the British and Canadian governments expressed concern about the potential effect of the law on their citizens in the city, business confidence and Hong Kong's international reputation. Both governments had made their views clear to Hong Kong authorities, they said.

Mr Chris Patten, the last colonial governor of the territory, said this month that it was the worst thing to happen in Hong Kong since it was handed back to China in 1997, and would break China's "one country, two systems" promise.