HONG KONG (NYTIMES) - Hong Kong International Airport - sleek, modern and famously efficient - has helped symbolise the city's place as one of the world's busiest and most important commercial hubs since it opened more than two decades ago.

But this week, the airport, long a source of local pride, became the epicentre of civilian unrest as anti-government protests escalated. For the second day in a row, the airport suspended check-ins on Tuesday (Aug 13) as thousands of protesters occupied parts of the departure and arrival halls.

Protesters blocked check-in gates, and the police urged travellers to leave. Unhappy passengers scuffled with protesters as voices, and tensions, rose. Tourists scrambled to gather bags and usher children away from the restive crowd.

Not too long ago, such scenes would have seemed unthinkable at the airport, the world's eighth busiest as well as the largest air cargo centre, with more than five million metric tonnes passing through in 2018. While large-scale protests became a regular occurrence in Hong Kong in recent months, the airport had remained largely untouched.

Many demonstrators say their shift to the airport was almost inevitable, intended to intensify pressure on Hong Kong's leader, Mrs Carrie Lam, to meet their demands.

What began this year as opposition to a measure that would ease extraditions to the mainland has grown into a broader movement that includes demands for greater democracy and calls for Mrs Lam to step down.

Mr Peter Tan, a 23-year-old student, said the protesters had to move on from their earlier tactics of occupying roads, shopping malls and parks.

"Unfortunately, we have to block the airport to put pressure on the government and show that we can make noise," Mr Tan said. "We don't know what will be the result of this, but we need to try every method."

The airport, which stretches across Chek Lap Kok island, opened in 1998 to replace Kai Tak Airport, which had been the city's main entry for international flights since 1925.

Kai Tak, nestled between the city's high-rises and steep hills with a runway protruding into the sea, was also renowned for its treacherous landings. Passengers landing at the old airport often described peering into the windows of neighbouring flats on their descent into the city.

Construction of the new airport began before Britain handed sovereignty of Hong Kong to China, but the work wasn't completed until a year after the transfer.

The new airport stood in stark contrast to Kai Tak. It was designed by Norman Foster, the winner of the 1999 Pritzker Architecture Prize, who also designed Stansted Airport in London, the Millennium Bridge and the Great Court at the British Museum.

With its wide aisles, bright terminals and a high-speed train connecting passengers to the city's centre in 24 minutes, the airport helped make the city an even more desirable place to do business. 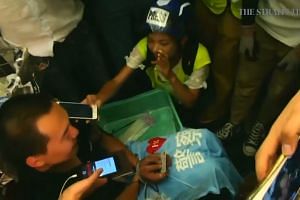 Protests will lead to 'mainlandisation' of Hong Kong as Beijing seeks to restore control over city, say experts

In July, protesters held their first large demonstration at the airport, occupying the arrival hall to express their anger that the police were slow to respond when a mob attacked protesters in a northern town a week earlier.

That peaceful sit-in was mainly intended to embarrass the local authorities by spreading a message of discontent and insecurity to arriving travellers. At the time, signs were emerging that a number of civil aviation employees supported the protest movement.

Less than two weeks later, when protesters called for a day-long general strike after the government continued to reject their demands, some air traffic controllers called in sick, forcing the airport to cancel more than 200 flights that day.

This past weekend, the protesters staged a three-day demonstration at the airport that was comparatively undisruptive. But many demonstrators were enraged by reports early on Monday that the police elsewhere had chased protesters down narrow escalators, fired tear gas into a subway station, and fired rubber bullets and beanbag rounds at protesters.

Calls went out in the protesters' mobile messaging groups on Telegram, a chat app, for them to flood the airport to demand police accountability. They showed up in the thousands.

On television, they could be seen trying to explain the protest to travellers. "I hope you understand us," one demonstrator told a visitor. "We don't have any more strategy. All our strategies have failed."