Travellers flying into Hong Kong yesterday were greeted by more than 1,000 black-clad protesters voicing their unhappiness with the police and their anger at the government's handling of a now-shelved extradition Bill.

The demonstration came as the city's government apologised for the police's handling of an attack on protesters and commuters last weekend by thugs said to be linked to triads in the northern district of Yuen Long.

Ahead of the sit-in protest, Singapore's Ministry of Foreign Affairs encouraged travellers to avoid the Hong Kong airport yesterday as well as Yuen Long today.

Hong Kong has been rocked by protests for weeks after the government attempted to push through a Bill which would allow for the handover of fugitives to other jurisdictions, including mainland China.

While the Bill has been suspended, intense public anger has continued, with protesters calling for Chief Executive Carrie Lam to step down and for an independent inquiry to be launched over perceived police brutality when dealing with demonstrators.

In a bid to find new ways to spread their message, protesters, who included aircrew and workers from the aviation industry, converged on the Terminal 1 arrival hall of one of Asia's busiest airports, holding up signs with protest slogans to reach foreigners visiting the city.

One called for Mrs Lam to be "offloaded", an aviation reference to kicking someone off a plane. Others warned of the unreliability of the police, a reference to their delayed response to the violence in Yuen Long.

Many of the signs were in English, with others in simplified Chinese, Korean and even Spanish, a push to reach a global audience.

It is quite shocking when you first walk out and are met with a wall of noise... Yes, it is a bit crowded but it is fine, we are going to have quite a story to tell friends.

As travellers walked out through sliding glass doors, they were handed fliers made to look like tourist pamphlets, including a guide to the best places in Hong Kong to experience a protest.

Ms Louise Thompson, 23, from Australia, said: "It is quite shocking when you first walk out and are met with a wall of noise. I am not sure I fully understand the issue but it is not too bad. Yes, it is a bit crowded but it is fine, we are going to have quite a story to tell friends.

"I have heard some places were unsafe, but I don't think they are on our list of places to visit, so I think we will be fine."

Mr Mark Putney, 46, on a business trip from Thailand, was taking a selfie with protesters in the background. "Everything still works and there haven't been any delays. I don't mind that it is a little bit crowded, this is what democracy is about." 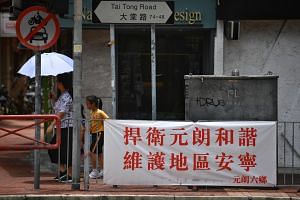 Yuen Long: Where villagers are pitted against outsiders

The airport authorities said operations would not be affected, but advised passengers on its website to arrive early for their flights.

Extra security and staff were deployed to guide the arriving passengers, while some benches had been removed to create extra space. Protesters also left passageways for travellers to navigate at the airport.

Recent mass rallies started out peacefully but escalated into violence at night after smaller groups of protesters stayed behind to clash with the police.

A proposed rally in Yuen Long today has been blocked by police, citing fears of violence. But there are at least four alternative rallies planned, though none has received the green light from the authorities.