SEOUL (BLOOMBERG) - As the natural heir to the family controlling Hanjin Group, Walter Cho was catapulted to the top job at the scandal-plagued South Korean empire within weeks of his father's death. Now comes the hard part.

Mr Cho, 43, assumed the position of chairman last month by virtue of being the only son of the late patriarch, sparking scepticism on whether he is capable of leading the airlines-to-logistics conglomerate founded in 1945.

He may get a chance to prove his doubters wrong later this week when he hosts the global aviation industry's biggest annual conference in Seoul, as president of the group's flagship Korean Air Lines.

Mr Cho's inheritance brings with it challenges, including fending off a siege by activist investors. But the biggest of them may come from his own family. There's speculation of an internal feud, with Mr Cho and his two ambitious sisters owning stakes of similar size in the group's holding company. Mr Cho's grip on the empire could become tenuous if the siblings seek to claim a greater role.

"The most urgent task for Walter Cho is to finalise the succession," said Mr Park Ju-gun, president of corporate research firm CEOscore in Seoul. "He has to show his own vision and prove he's different from his father. So far, I haven't found a reason behind his appointment except for the fact that he's the only son."

The speculation over a family rift started this month after Hanjin Kal Corp, the group's holding company, missed a deadline for an annual filing to South Korea's Fair Trade Commission on who will head the businesses after the April 7 demise of patriarch Cho Yang-ho.

The FTC, in a statement then, attributed the one-week delay to Hanjin's failure to arrive at a consensus on the next leader. 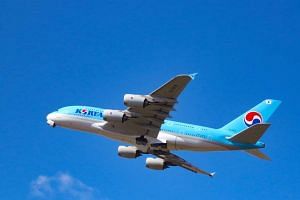 The family intrigue comes as the conglomerate is seeking to put behind a string of scandals that refuse to fade from the public's memory: One of Mr Cho's sisters hit headlines worldwide a few years ago for the infamous "nut-rage incident" and most recently, his late father was charged with embezzlement.

The scandals triggered a public outcry in South Korea against the privileged and re-ignited debate over whether the country's vaunted chaebol - family-run conglomerates - hold too much power and influence.

Despite the controversies, Mr Cho's sisters played a key role in building the brands of the carriers they oversaw.

"Heather and Emily seem to have the willingness to get back their management rights although they are barred from participation due to the past scandals," said Mr Chung Sun-sup, chief executive officer of business researcher Chaebul.com.

The Cho family and its closest allies own about 29 per cent of Hanjin Kal, with the siblings - Walter, Heather and Emily - holding about 2.3 per cent each. Should Mr Cho acquire the late chairman's 17.8 per cent stake, that would hand him the biggest holding in the firm, but standing in the way is a 50 per cent inheritance tax, among the highest in the developed world.

Compounding Mr Cho's woes are activist investors who've been targeting the chaebol for their comparatively weak returns and lack of shareholder transparency.

Korean Air ranked the second worst among Kospi 200 companies in terms of poor governance, according to Bloomberg ESG data. The carrier's ISS Governance QualityScore, which evaluates governance risks in board structure, shareholder rights, audit oversight and compensation programme, is at nine, the worst among Asian peers that scored an average 4.7.

In its latest move at Hanjin Kal, the Korea Corporate Governance Improvement fund on Tuesday revealed owning almost 16 per cent, after gradually raising its stake from 9 per cent in November. The state-run National Pension Service owns about 4 per cent.

Showcasing their power, shareholders of Korean Air in March voted to remove the then-chairman Cho Yang-ho from the board of the carrier days before his death. The late patriarch was facing trial for allegedly embezzling 19.6 billion won (S$22.7 million) in the five years through 2018.

Other groups have found themselves in the crosshairs of activist funds as well.

Mr Singer also took aim at Samsung Group's succession-related restructuring, that eventually touched off a series of events and resulted in the downfall of the then South Korean president Park Geun-hye.

Mr Walter Cho will be in the spotlight at the annual general meeting of International Air Transport Association (IATA) starting June 1, where he will rub shoulders with the chiefs of carriers from Delta Air Lines to Singapore Airlines and Qantas Airways.

His stewardship of the event may provide clues to how he plans to tackle the broader issues at the Hanjin Group.

"Walter needs to show his leadership to shareholders before next year's annual meeting," said Chaebul.com's Chung. "The chief of an airline has a role like an ambassador. His skills will be tested at IATA."