SEOUL (AFP) - The head of South Korea's flag carrier Korean Air - whose family have been embroiled in multiple scandals including one involving a "nut rage" tantrum - lost his board seat after shareholders voted against extending his term as director, the airline said on Wednesday (March 27).

Cho Yang-ho, who is currently on trial for corruption, failed to secure a required two-thirds majority, becoming the first controlling shareholder of a South Korean conglomerate to be forced off the board.

The super-wealthy owners of chaebols - the sprawling conglomerates that dominate the world's 11th-largest economy - are no strangers to controversy, but a string of high-profile scandals have vaulted the Cho family to notoriety in South Korea, even sparking protests by their employees.

The 70-year-old tycoon is the chairman of the Hanjin Group, which used to own the now-bankrupt Hanjin Shipping line.

Cho controls around 30 per cent of Korean Air through its parent company Hanjin Kal.

But the National Pension Service, the airline's second biggest shareholder, had said on Tuesday that it would oppose Cho's re-election, citing his records of "undermining corporate value and infringing upon shareholder rights".

"It is correct that he has lost his seat as the director of the board," a Korean Air spokesman told Agence France-Presse. 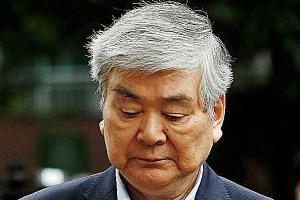 The Cho family has been under scrutiny in recent years after being embroiled in multiple criminal probes over charges ranging from assault to embezzlement and smuggling luxury goods.

Cho is on trial for embezzling more than 20 billion won (S$23.8 million) and unfairly awarding contracts to companies controlled by his family members.

His two daughters, who held management positions at Korean Air, previously became viral sensations for temper tantrums dubbed the "nut rage" and "water rage" scandals, forcing Cho to issue a public apology and remove them from their posts.

The elder daughter, Cho Hyun-ah, made global headlines in 2014 for kicking a cabin crew chief off a Korean Air plane after she was served macadamia nuts in a bag rather than a bowl. She later served a short prison sentence.

Last year, her younger sister Cho Hyun-min was accused of throwing a drink into an advertising agency manager's face in a fit of rage during a business meeting. She was not indicted, as the victim did not want to press charges.

Their mother Lee Myung-hee, has been questioned by police several times in connection with allegations of assault against her employees including cursing, kicking, slapping and even throwing a pair of scissors.

Patriarch Cho himself received a suspended jail sentence for tax evasion in 2000 and is awaiting a separate trial for using 30 billion won of company funds to renovate his house.