HONG KONG - A law firm involved in almost all initial public offerings of real estate investment trust (Reit) in Hong Kong is calling for the development of a Reit for Beijing's ambitious Greater Bay Area plan, seen as one of the key engine of growth for China in the coming years.

Law firm Baker McKenzie said a Greater Bay Area Reit market or G-Reit will open the doors for the island's tepid Reit market to rejuvenate and catch up with other markets in the region, including Singapore.

The firm on Wednesday (March 27) urged the market and regulators to consider developing a G-Reit framework.

"The structure we're proposing here actually is similar to what Singapore Reits (S-Reits) already have - external management model, similar to what all but one of the Hong Kong Reits have.

"So in a sense, it's learning from good experience that the Singapore market has already built up," Mr Cheng added.

The firm suggested that for a start, assets in the Greater Bay Area would be listed in Hong Kong as the city already has a mature Reit market and structure.

"But in due course it could also include Reits listed in Shenzhen when the relevant Chinese regime is also established," said the firm. 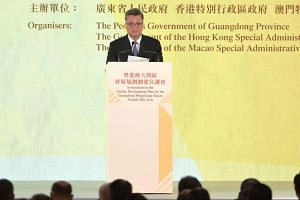 Greater Bay Area can be 'Silicon Valley and Wall Street'

It noted that Hong Kong's role within the proposed bay area is centred on the island being the financial hub for capital inflows and outflows and the G-Reit is one way to achieve that.

The proposed G-Reit can help as an additional means for bay area developers to attract and recycle capital, as well as facilitate the supply of quality properties in the area, said Mr Rico Chan, head of the firm's real estate group in Hong Kong.

He added that this will also provide a recognisable and an easily understood investment product for retail investors in the Chinese bay area.

Lawyer Jeremy Ong said it is currently easier to inject Chinese assets that are already in an offshore company into a Hong Kong Reit.

Greater Bay Area-based developers will face additional costs in order to restructure to set up G-Reits and this, Mr Ong added, may prove a disincentive.

However, the silver lining is that G-Reits listed in Hong Kong can be included under the existing framework for Southbound Trading under Hong Kong-Shenzhen Stock-Connect, Mr Ong said.

Growth in Hong Kong's Reit market has been sluggish, especially when compared with counterparts such as Singapore and Japan.

The city has 10 listed Reits with a total market capitalisation of about S$54 billion in March, data from the Hong Kong Stock Exchange showed.

Data from the Reit Association of Singapore showed that Japan's Reit market is worth about S$155 billion while Singapore's is at about S$90 billion as at August 2018.

Asked how far the proposed G-Reits can go in giving S-Reits a run for its money, Mr Cheng said: "Whether or not we would then see less of the assets coming to list in Singapore or not, maybe yes, maybe no, we don't know."

He added there are now quite a lot of institutional investors that invest in multi-countries across the region.

"So if what you're trying to do is to have another product that another market has done, doesn't mean that Singapore can't do it, you just need to then try and find alternative ways to access those assets or those investors," Mr Cheng noted.

And while Singapore has done "a really good job" in trying to increase access to assets, "more can be done", he said, adding that "hopefully there's enough to go around for everybody".

Hong Kong is a more natural market for listings by Chinese businesses, led partly by language and investor familiarity.

That said, given Singapore's lead in the Reit space, the asset managers and bankers familiar with the process will be very valuable to the G-Reit and can then help with developer, regulator and investor education, Mr Cheng pointed out.

In February, Beijing unveiled a vague Greater Bay Area blueprint to link up nine cities in Guangdong province with the special administrative regions of Hong Kong and Macau, while sticking to the "one country, two systems" principle.

The plan is the brainchild of Chinese President Xi Jinping and is meant to push China's economy forward by taking it on the path of innovation and high-tech development.