HONG KONG - Chinese authorities have unveiled the timeline to further integrate Hong Kong and Macau into the mainland under the ambitious Greater Bay Area plan to create a cluster of world-class cities in southern China.

An 11-chapter document released on Monday night (Feb 18) by the central committee of the Chinese Communist Party stated that the 11 cities in the plan would boost collaboration by 2022 in areas including the central pillar of science and technology, intellectual property rights and even ecological conservation.

By 2035, the region would have developed an economic system largely driven by innovation.

Guangzhou, Shenzhen, Hong Kong and Macau were identified by Beijing as core engines for driving growth in nearby regions.

The road map calls for Hong Kong to build on its status as an international financial, transportation and trade hub.

The city would focus on offshore yuan, international asset management and risk management, as well as developing innovation and technology industries.

Beijing also outlined its support for Hong Kong becoming the hub for international legal and dispute resolution services in the Asia-Pacific region.

Hong Kong Chief Executive Carrie Lam welcomed the strategic blueprint and thanked the central government "for placing importance on the views of the Hong Kong government".

A government spokesman said in a statement: "The development of the Guangdong-Hong Kong-Macau Greater Bay Area is not only a new attempt to break new ground in the country's pursuit of opening up on all fronts in a new era, but also a further step in taking forward the implementation of 'one country, two systems'."

Guangzhou would strengthen its function as an international commerce and industry hub while Shenzhen would leverage its strength as home to China's innovation and technology giants and be turned into a special economic zone. 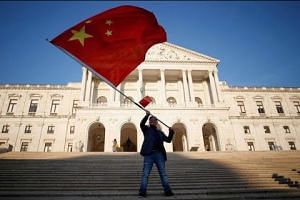 Macau would focus on being the "world centre for tourism and leisure" and act as a bridge to Portuguese-speaking countries.

Ms Ayesha Lau, the Hong Kong managing partner at KPMG China, noted that Beijing has a lot riding on the Bay Area plan given that the trade war with the United States "really highlights the risk of China being isolated in the world".

"China needs more engines for economic growth. It can no longer rely on exports. It must generate more internal demand," she said, adding that the Bay Area is "an ideal place" for Beijing to try out new initiatives aligned with the opening up policy before rolling them out at a national level.

Still, significant doubts remain as to how the scheme could work given the different legal and tax systems in the area.

Professor Chen Guanghan from Sun Yat-sen University and vice-dean of the Research Institute of the Development of Guangdong, Hong Kong and Macau said the plan "would face many problems in trying to integrate these different systems".

"In this case, the central government should allow the local authorities to have space to explore what can be done," he added.

The Bay Area plan reflects China's innovation and technology ambitions and is aligned with its Made in China 2025 masterplan, a 10-year road map for the future of the manufacturing sector.