SEOUL, SOUTH KOREA (NYTIMES) - Secretary of State Mike Pompeo met on Sunday (Oct 7) with Mr Kim Jong Un of North Korea as he tried to get him to take steps toward denuclearisation and arrange another summit meeting with President Donald Trump.

Here are four things Mr Pompeo got - and did not get - from the meeting.

After Mr Pompeo's visit, hopes are rising for a second meeting between Mr Trump and Mr Kim.

President Moon Jae-in of South Korea, who was briefed by Mr Pompeo on his trip to Pyongyang, said the North and the United States had agreed to hold its second summit meeting "as early as possible" to follow up on the vaguely worded agreement on denuclearising North Korea that the two reached in Singapore in June.

But Mr Pompeo left Pyongyang without a location and date for what his department called "the upcoming second summit". 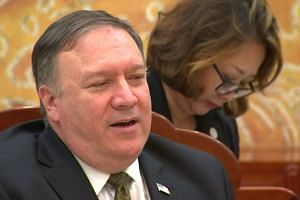 Trust is essential in getting North Korea to denuclearise, says former US secretary of energy

In the proposed second summit, Mr Trump hopes to deliver major progress in his efforts to denuclearise North Korea, while Mr Kim has vowed not to give up his nuclear weapons without "corresponding" concessions from Washington.

"We're not quite there yet, but we'll get there," Mr Pompeo said on Monday. "Sometimes that last issue is hard to close."

2. NORTH KOREA AGREES TO OUTSIDE INSPECTORS

After Mr Pompeo's visit, Washington announced that Mr Kim had invited inspectors to visit its Punggye-ri nuclear test site to confirm that "it has been irreversibly dismantled".

In May, North Korea destroyed the Punggye-ri site, a network of underground tunnels where its six nuclear tests were conducted.

It allowed international news crews to film engineers dynamiting the tunnels, but barred outside experts or inspectors, raising questions on whether it destroyed only the tunnel entrances so it could reopen them for more tests.

The State Department did not say who would conduct the inspections. But Mr Moon's office said that Mr Pompeo and Mr Kim discussed "the US government's observations" of the North's steps toward denuclearisation.

"If inspections and verification successfully take place to prove that Punggye-ri is permanently dismantled, that will be a significant progress for denuclearising North Korea," said Dr Lee Byong-chul, a senior fellow at the Institute for Peace and Cooperation in Seoul.

"But the question is what the United States can offer in return that has an equal value for the North."

North Korea says it will denuclearise only if Washington takes "corresponding" steps to give it security guarantees to assure the "lasting and stable peace" that Mr Trump promised Mr Kim in Singapore.

North Korea says that one of the first things Washington can do to show that it is no longer a threat is to join the two Koreas and China in jointly declaring an end to the Korean War, which was only halted with a truce in 1953.

4. BUT NO PLEDGES TO DISMANTLE NUCLEAR WEAPONS

Glaringly absent in statements from both Washington and Pyongyang on the meeting was any indication that Mr Kim would ship out his stockpile of fissile materials and dismantle his nuclear arsenal, including nuclear warheads and their delivery systems.

He has also offered to dismantle its Yongbyon nuclear complex, a centre for producing fuel for nuclear warheads, if Washington takes corresponding steps.

These steps could curtail Mr Kim's ability to build more nuclear warheads and develop more powerful missiles in the future.

But Mr Kim has so far done nothing to reduce or dismantle the nuclear weapons he has already built. Nor did he disclose a full inventory of his nuclear assets or agree to intrusive inspections to verify that he is not hiding any weapons.

Dr Adam Mount, a senior fellow at the Federation of American Scientists, said North Korea had so far confined its disarmament steps to testing infrastructure without taking moves related to reducing the arsenal itself or the facilities that produce it.

He also questioned how much American inspectors could achieve by visiting the dynamited Punggye-ri site.

"Inspecting the nuclear test site is a strong sign Pyongyang wants to continue talks - but is not itself a major arms controls step," Dr Mount said by e-mail.

"It is another symbolic step offered to an administration that has been content with symbolism."