OSAKA (BLOOMBERG) - Prompted by a reporter's question, US President Donald Trump asked Russian President Vladimir Putin not to interfere in the upcoming US election during a meeting at the Group of 20 summit.

Trump's admonition did not appear to be serious. Putin smiled at first, and turned to his translator. After she told him what Trump had said, he laughed. Trump looked at Putin, shook his head and smiled.

Trump has repeatedly disputed the consensus of US intelligence officials that the Kremlin interfered in the 2016 election, and has often chided reporters who ask whether he'll warn Putin against further meddling in 2020.

"What I say to him is none of your business," he told reporters on Wednesday before departing for the summit in Osaka, Japan.

Putin has denied that Russia interfered in the 2016 election, and Trump sided with him at a summit in Helsinki in July. The US president was castigated by lawmakers back home over the incident, forcing him to later walk back the remarks.

The meeting was the first extended encounter between the men since their Helsinki summit. It's also the first time Trump and Putin have met since the conclusion of Special Counsel Robert Mueller's probe into Russian election interference. Mueller determined that there were "multiple, systematic efforts" by the Russians to interfere in the 2016 election, and that the meddling deserved the attention of all Americans. 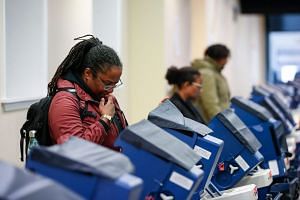 Russians' US election interference has inspired copycats around the world: US study

US officials recently warned that Russia is likely to again attempt an interference campaign in the 2020 elections.

For Moscow, the meeting helps promote Putin's status as a prominent world leader despite years of efforts by the US and its allies to isolate him.

Trump cancelled a meeting with Putin before November's G-20, citing Russia's capture of Ukrainian ships and sailors in a Black Sea naval clash. Russia has yet to release them.

"We haven't seen each other for a long time since the Helsinki meeting," Putin said through a translator. "However, our staffers had been working and gave us a good opportunity to continue what we agreed on."

A US official said before the summit that Trump would seek to improve relations with Russia in the meeting. He is virtually alone in Washington in desiring warmer relations with the Kremlin, which is regarded by most US lawmakers as acting against American interests across the globe.

Putin has provided military support for Bashar al-Assad's regime in Syria and is working with Germany to construct a natural gas pipeline, Nord Stream 2, through the Baltic Sea.

Russia is trying to close a deal with Turkey to sell the Nato country an anti-aircraft missile system, a transaction the US has threatened would lead to sanctions against Ankara.

Since Trump and Putin last met, the US president withdrew from the Intermediate-Range Nuclear Forces Treaty, citing violations by Russia. Trump has periodically said he'd like to negotiate a new arms control agreement with Putin.