In its editorial, the paper says some provisions in Beijing's new foreign investment law remain a worry.

BEIJING (THE YOMIURI SHIMBUN/ASIA NEWS NETWORK) - China's peculiar economic structure can be corrected only by establishing an environment where foreign companies based in the country can operate free from anxiety.

To what extent the administration of Chinese President Xi Jinping will implement a new law is being questioned.

Chinese Premier Li Keqiang said that the government must protect the interests of foreign firms based on the spirit of the law.

The Chinese economy has rapidly grown by proactively introducing technologies and investment from other countries, including Japan. It is commendable that the Chinese premier publicly pledged to protect foreign-invested enterprises based on the law.

What is in question now is the effectiveness of the pledge because the new law only bans government bodies and officials from using administrative means to force foreign firms to hand over their technologies and corporate secrets. 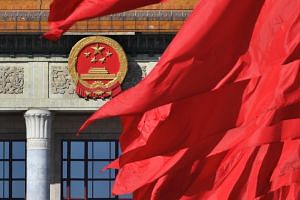 If foreign companies want to expand their businesses into such fields as the automotive industry, which Beijing sees as an important sector, it is mandatory for such companies to operate in the form of joint ventures with local firms.

If they refused to hand over their technology to their local partners, they would not be permitted to establish factories. There have been many cases in which foreign firms have suffered from such disadvantages.

Just banning outright interference by the government in foreign businesses would not make it possible to close loopholes existing within Chinese firms that serve as joint venture partners of foreign companies.

It remains questionable as to why Chinese authorities incorporated in the new law a system to screen the impact of foreign firms' investment on China's national security.

This could hamper legitimate corporate activities, with Beijing citing security issues as a reason.

It is only natural that a group of US companies operating in China issued a statement expressing their concerns, saying Beijing's regulations are ambiguous.

China should recognise it is imperative to work towards establishing a fair and open market in order to ensure stable economic growth in the country and earn the trust of the international community, including the United States.

It is of concern that the new law contains elements that could intensify the confrontation between the United States and China. It stipulates that Beijing will take appropriate action against countries and regions that adopt discriminatory measures against China.

It is apparently aimed at retaliating against the US government's announcement of a policy banning products of Huawei Technologies Co, China's leading telecommunications equipment company, and calls for other countries to follow suit.

If the two major powers - the United States and China - justify unilateral import restrictions and sanctions against each other, by linking security problems to trade, the free trade system based on the pact of the World Trade Organization will be shaken.

Both sides need to exercise self-restraint.