BEIJING - An affront to China's national dignity, and the principle of "one countries, two systems", and which the majority of Hong Kongers reject: that is how Chinese state media has framed the latest anti-government protests that took place in the special administrative region.

State-run outlets such as China Daily focused largely on condemning the extreme actions of the weekend's protests, including an incident last Saturday that saw protesters throw the Chinese national flag into Victoria Harbour.

This was the second insult to the mainland, after protesters defaced the national emblem a fortnight ago, said Chinese media outlets, in language which experts said could be laying the ground for a tougher ground response in coming days.

Officials from China's State Council will hold a press conference on Tuesday (Aug 6) about the unrest in Hong Kong, the second briefing in as many weeks. Two representatives from the Hong Kong and Macao Affairs Office of the State Council - a prominent party organ that deals with the two semi-autonomous hubs - will speak to the media in Beijing about the "current situation in Hong Kong".

In a front page editorial on Monday, the official People's Daily newspaper highlighted what it called "radical, violent elements which used the peaceful march as a cover".

"Time and again, they have broken the law: they have attacked police with bricks, iron bars, petrol bombs, used poisonous and harmful liquids, and even bit officers' fingers," it wrote.

Mainland outlets also said the protests did not have the support of Hong Kong's majority, drawing attention to "peaceful, full-of-positive-vibe" counter-rallies that took place over the weekend.

Focusing on ground resistance to the series of protests and strikes aimed at Hong Kong's Mass Transit Railway and roads on Tuesday, state media called on Hong Kong's silent majority to counter the violence of the few.

"The majority of the Hong Kong people want peace, order, and a prosperous home, (while) the rioters' are threatening their normal lives," said China Daily. "The future of Hong Kong lies in the hands of these patriotic residents." 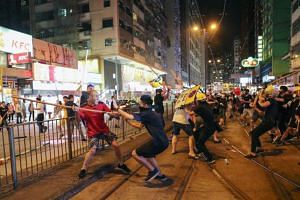 The same picture was portrayed on China's heavily controlled social media platforms, with the majority of posts in support of the Hong Kong government and police.

Videos that were allowed on Weibo either showed protesters paralysing the city's roads and trains, or pro-government supporters shouting slogans in support of Hong Kong police.

Chinese netizens appeared largely in favour of tougher police action, with many calling for more arrests. "The situation in Hong Kong needs our support, I suggest that police officers in nearby Guangdong be sent in to help restore stability," one Weibo user wrote.

Observers such as Hong Kong-based political analyst Willy Lam said China's narrative of the protests "suggests Beijing is preparing for harsher, more draconian policies" should the situation continue to deteriorate.

But framing the protesters' actions as an insult to national dignity and appealing to nationalistic tendencies could backfire on Beijing, said Dr Lam.

"They are stoking the flames of nationalism and the danger is that once there is such animosity, it is very difficult to defuse," he said. "Of course, it will help justify the use of draconian tactics, such as the deployment of Chinese soldiers in Hong Kong."

At the same time, Beijing's appeal to the broad masses of the Hong Kong public to rally against the protesters is also unlikely to work, as the government has not shown that it wants to meet protesters' demands, such as for universal suffrage, according to Professor Steve Tsang, director of the SOAS China Institute in London.

"People in HK have made very clear what they actually want, and none of those things are being met," said Dr Tsang.

"Bear in mind that even the older people are parents of the demonstrators; they are not going to take the view that the Chinese government is just going to focus their attention on the young people and we are going to be alright. It's their children who are going to be going to jail for a very long time."