HONG KONG - Hundreds of mostly black-clad anti-extradition Bill activists were locked in a stand-off with police in Hong Kong’s Mongkok and Tsim Sha Tsui tourist districts on Saturday (Aug 3), as the city braces itself for potential major anti-government demonstrations on Monday.

The protests, which are taking place for the ninth straight weekend, showed no sign of abating, despite warnings from the Chinese military that the Hong Kong authorities can request the assistance of the People’s Liberation Army (PLA) Hong Kong garrison if necessary.

In fact, some residents have waded into the ongoing crisis as they clashed with officers at Wong Tai Sin MTR station, triggering the firing of tear gas by police.

On Saturday night, police fired tear gas and pepper spray to disperse the crowd on the streets of Mongkok and Tsim Sha Tsui. Many of the protesters, armed with wooden sticks, were throwing bricks and glass bottles. Arrests were made in the clearing of streets.

Before that, some protesters fired projectiles through the gates of Tsim Sha Tsui police station and pointed laser pens at the building.

Others set up a huge barrier outside Intercontinental hotel in Tsim Sha Tsui, while a few were heard singing the United States national anthem.

Another group of protesters moved road blocks onto the street outside the five-star Peninsula Hotel in Salisbury Road, also in Tsim Sha Tsui.

Protesters also removed a Chinese national flag from a pole and flung it into the Victoria Harbour.

Mr Leung Chun-ying, Chief Executive Carrie Lam’s predecessor, wrote on his Facebook page that he will offer HK$1 million (S$176,000) to any resident who can provide evidence leading to the arrest of protesters who threw the Chinese flag into the harbour.

Earlier in the afternoon, some of the anti-government protesters had marched from Mongkok to the cross-harbour tunnel and briefly blocked it to vehicles, amid warnings by police not to obstruct traffic.

Police estimated some 4,200 people took part in the march in Mongkok on Saturday, while organisers pegged the number at 120,000.

During the largely peaceful rally on Saturday afternoon, most of them chanted in Cantonese: “Restore glory to Hong Kong, time for a revolution.” Some shouted: “Monday, strike!”, while drivers slowed their vehicles and shouted out “gah yau” – Cantonese for “keep it up” to the marching protesters. 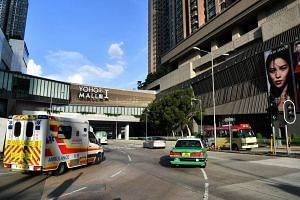 In Causeway Bay, across the harbour on the Hong Kong Island side, crowds gathered in Victoria Park to show support for the city’s police, who have become a target for the anti-government protesters.

The protests were triggered by Mrs Lam’s push to amend an existing extradition law, but have since morphed into anger over loss of freedoms, perceived meddling by China and demands for greater democratic reforms.

On Sunday (Aug 4),  protesters are expected to take part in a march in Tseung Kwan O and the west side of Hong Kong Island.

But what worries businesses most is Monday’s  planned general strike, backed by unions and individual professionals in various sectors including transport, welfare and the media.

On Friday, Ms Carol Ng, chairman of the Confederation of Trade Unions (CTU), said most of the 95 unions affiliated with the CTU have voted to take part in the strike. There have also been calls for protesters to disrupt train services on Monday morning.

In addition to the general strike, protesters are seeking approval to hold seven rallies in various locations across Hong Kong on Monday. The seven venues are Admiralty, Mongkok, Wong Tai Sin, Shatin, Tuen Mun, Tai Po and the gates of Hong Kong Disneyland.

The final event is in Tsuen Wan and organisers will not be seeking permission for this as they said people will head to Tsuen Wan Park to look at flowers and trees.

These planned protests come after some 13,000 civil servants filled Chater Garden in the heart of Hong Kong's business district on Friday night in a rare show of dissent.

They were protesting against the government's handling of the highly controversial extradition Bill, which has now been suspended but not fully withdrawn.