MANILA(Reuters) - Chinese President Xi Jinping arrived in the Philippines for a state visit on Tuesday (Nov 20), aiming to advance strategic gains made under a Manila leadership that has favoured Beijing in the hope of receiving billions of dollars of loans and investment.

Xi's visit comes two years after Philippine counterpart Rodrigo Duterte declared he was reorienting his foreign policy away from the United States and towards China, despite decades of mistrust and bitter maritime disputes with Beijing.

In a commentary in Monday's Philippine Star newspaper, Xi praised Duterte and described ties as being "a rainbow after the rain" and repeatedly called for the "proper handling" of rows over the South China Sea.

But Duterte's style of handling has frustrated nationalists, who say he has been submissive in refusing to criticise China's military buildup, or seek its compliance with a 2016 arbitration award that invalidated its claim to almost the entire waterway.

Public opinion is largely supportive of Duterte's presidency but surveys consistently show reservations about his China policy and disdain for the United States.

A Social Weather Stations survey released late on Monday showed 84 per cent of Filipinos felt it was wrong not to oppose China's militarisation of its man-made islands, and 86 per cent believed it was right to strengthen the Philippine military, especially the navy.

The poll of 1,200 people conducted in late September also showed trust in the United States remained "very good", but China was considered "poor".

A small protest was held outside China's embassy in Manila on Tuesday. 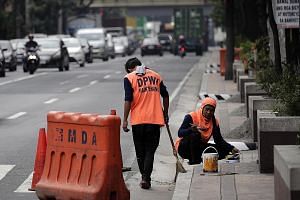 Asked on Tuesday about the survey, presidential spokesman Salvador Panelo, said Duterte's strategy was to avoid a potential "inferno" of conflict while reaping the rewards of improved business.

"They are not aware of the real geopolitics in the region. The president is a very cautious diplomat," Panelo told news channel ANC.

"Rather than provoke, he'd rather talk with them and get some trade relations that will benefit this country."

Panelo accepted that those benefits, including US$24 billion (S$32.9 billion) of pledged loans and investments, were yet to materialise, but said Duterte was not scared to speak up.

"This is the best time for the president to exert pressure on the Chinese president," he said.

"Knowing the man, he'll do that, he's that kind of person."

Duterte has heaped praise on Xi for his support for his infrastructure programme, although just three of dozens of such planned projects have broken ground.

Some analysts say Duterte risks appearing as if he has been duped into making concessions.

Other Philippine experts say delays in securing Chinese credit could be a blessing given the potential debt burden, echoing a warning delivered by US Vice President Mike Pence.