Philippine President Rodrigo Duterte said yesterday that China was already in possession of the South China Sea, and that military drills by the United States and its allies were creating frictions that were derailing efforts to settle rows in these waters between Beijing and its neighbours.

"China is already in possession (of the South China Sea). It is now in their hands. So why do you have to create frictions… that will prompt a response from China?" Mr Duterte told reporters on the sidelines of the Asean Summit in Singapore.

"China is there," he added. "That is a reality, and America and everybody should realise that they are there."

He said that should war erupt in the South China Sea, "my country will be the first to suffer". He pointed out that the Philippines has a mutual defence treaty with the US.

China claims most of the South China Sea, which sees US$3 trillion (S$4.1 trillion) in sea-borne traffic every year.

The Philippines, Vietnam, Malaysia, Brunei and Taiwan have conflicting claims with China in parts of the South China Sea.

Mr Duterte said conflicts over the South China Sea could best be settled through talks between China and Asean, without the US and its allies turning up the heat through displays of force as "freedom of navigation exercises". 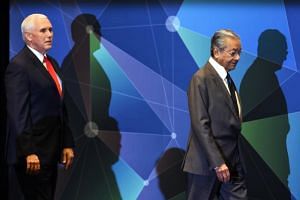 Mahathir tells US: No warships in Asean waters but small patrol boats are fine

"Everything has been excellent between China and the rest of Asean except for the fact that there is friction between Western nations and China," he told reporters.

He cited, in particular, a long-drawn-out process to negotiate a "code of conduct" that Asean and China hope to conclude in three years. The code was "needed at all cost", he said.

The Philippines is this year's coordinator between Asean and China.

Far from dialling down, however, the US is preparing to build up its forces in the region and increase patrols in the South China Sea, said National Security Adviser John Bolton.

"Countries of South-east Asia don't want to be dominated by any external actor, and we support that," he told reporters.

Coinciding with US Vice-President Mike Pence's presence at the Asean Summit, two US aircraft carriers with around 150 fighter jets were conducting "complex" warfare drills in the Philippine Sea, in a show of force in waters south of China.

The two carriers, the Japan-based USS Ronald Reagan and the USS John C. Stennis deployed from the US West coast, were carrying out air, surface and anti-submarine warfare operations, the US Seventh Fleet said in a statement.

Mr Duterte has pivoted towards China and away from the US, the Philippines' long-time ally, since he took office in 2016, as he courted investments from Beijing to push Philippine growth through an ambitious, US$169 billion infrastructure building programme.

His relations with the US have been strained by criticisms from the US State Department of his brutal war on drugs, which had left at least 4,000 suspects dead in its wake.