SHANGHAI (AFP) - The key role China played in grounding the troubled Boeing 737 MAX 8 has demonstrated its growing clout in global aviation and may give it an extra bargaining chip in trade talks with Washington.

China ordered its domestic airlines to ground the plane on March 11, a day after the deadly crash of an Ethiopian Airways Boeing 737 MAX 8.

That touched off a domino effect as other countries followed suit in the light of the aircraft's second fatal accident in months, and came two days before the Trump administration and US Federal Aviation Administration (FAA) ordered the plane grounded.

The situation raised eyebrows because China historically takes its cues from the FAA - particularly given the US safety regulator's familiarity with Boeing.

Regardless of the trade war or big-power rivalries, it was a move that China had to make, aviation analysts said.

China now has the world's fastest growing aviation sector as rising prosperity fuels travel among a huge population that a generation ago struggled to afford basic necessities.

A deadly safety mishap in Chinese skies would be a catastrophe for the Communist government. 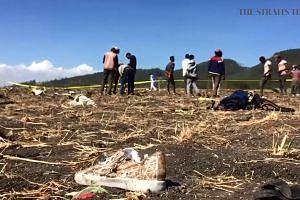 "China as a country simply has to be serious about safety. You can try to read more into it but...it's a country prioritising safety more than anything else because of the size of the market," said Mr Janesh Janardhanan, director of Aerospace, Defence & Security at business consultancy Frost & Sullivan.

"It was not a stand-alone isolated reaction, as many countries followed suit."

The turn of events has prompted suggestions that US regulators may have temporarily abdicated their vital watchdog role, giving China an opening to exercise more global leadership.

But analysts said the Boeing crisis will likely prove an isolated incident and there was no reason to view the FAA's days as the world's de facto safety watchdog to be under threat.

Boeing and European rival Airbus have a huge lead over China's homegrown passenger jets, which do not yet have a proven service record.

There also is concern over granting safety leadership to an opaque Communist Party government.

China had a dismal safety record culminating in a series of deadly plane incidents in the 1990s, improving the situation after inviting the FAA to work with the Civil Aviation Administration of China.

"The FAA and the NTSB (an US agency which investigates accidents) are the gold standard-setters in aviation safety. Let's not forget that the airplane was invented in the US. China's decision in my view will not change this," said Mr Shukor Yusof, head of Malaysia-based aviation consultancy firm Endau Analytics.

He added that on safety, China "has improved a lot, obviously. But it hasn't reached US or EU standards".

Mr Robert Mann, head of US-based aviation consultancy R.W. Mann and Co, said predictions of the FAA's decline were "precipitous, arguably irresponsible". But he noted that there was indeed propaganda value for China in the 737 fiasco.

"Science and hard data-based decision-making are becoming subordinate to public opinion and appearances," he said.

A generation ago, air travel was not that common in China, but the country is expected to surpass the US within a few years to become the world's largest market for air travel.

More than 1.26 billion passengers moved through Chinese airports in 2018, an increase of 10.2 per cent compared to the previous year, according to official figures.

An improving safety record has no doubt helped fuel such traffic, and thousands more aircraft are expected to be needed by China to keep up with future growth.

"China is the largest user of new planes, new aircraft deliveries, so you will see them play an increasing role in terms of defining safety standards, in terms of end-user expectations," said Mr Janardhanan.

China's stance on the 737 gives Beijing added leverage in its trade dispute with Washington.

Aircraft make up one of the biggest product segments in terms of US export value to China and it would not be difficult to see Beijing using the un-grounding of the 737 MAX 8 as a bargaining chip.

But China remains heavily dependent on jets from Boeing - and Airbus - and has excluded the US aircraft from the tariff war with the United States.

Longer term, China may be looking for a bigger voice in aviation to push its unproven domestically-made jets, but it will take "a decade at least" to see whether this will work, said Mr Mann.

"Chinese civil aircraft and high-bypass engine technology have a long way to go to be globally competitive," he said.