Mr Trump upped the ante in his trade dispute with China last week, announcing moves to curb Huawei's business that are starting to have ramifications for other companies around the world.

"This is wrong behaviour, so there will be a necessary response," Mr Zhang Ming, China's envoy to the EU, said in an interview in Brussels on Monday (May 20).

"Chinese companies' legitimate rights and interests are being undermined, so the Chinese government will not sit idly by."

Mr Trump last Friday signed an order that could restrict Huawei and fellow Chinese telecommunications company ZTE Corp from selling their equipment in the US.

The Trump administration, which says Chinese companies are obliged to aid Beijing in espionage, also put Huawei on a blacklist that could forbid it from doing business with American companies.

Calling the moves "politically motivated" and an "abuse of export-control measures", Mr Zhang said that "the US government is trying to bring down Huawei through administrative means".

He added that China would "make the best possible effort to defend the legitimate right and interests of Chinese companies" and urged Washington "not to go further down the wrong path, to avoid further disturbances to China-US relations". 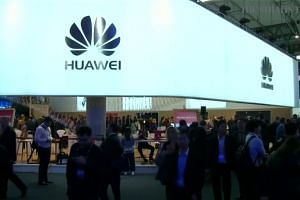 At a regular news briefing in Beijing, China's Foreign Ministry spokesman Lu Kang earlier on Monday said to "wait and see" with regard to what countermeasures the Chinese government and enterprises could take in response to the US measures against Huawei.

China's state media kept up its recent belligerent tone on Tuesday. Repeated misjudgment by the US could produce grave consequences, according to a commentary published in the People's Daily.

Attempts to impede the historical process of the great rejuvenation of the Chinese nation will be like "a mantis trying to stop a car with its arms", it said.

Washington's actions come as the US seeks to pressure China into agreeing to a wide-ranging trade deal. After Mr Trump this month escalated a trade war with China through tariff increases on US$200 billion (S$275 billion) of Chinese goods and a plan to impose levies on all further US imports from the country, Mr Zhang accused Washington of undermining more than a year of talks on an agreement.

"The United States has been repeatedly creating troubles to the consultation, undermining the positive momentum formed in the process of hard and tough negotiations and seeking illegitimate gains through bullying and blackmail," he said.

Why China will resist dumping US Treasuries

As Huawei loses Google, the US-China tech Cold War gets its Iron Curtain

He said China would refuse to back down in the face of such tactics while keeping the door open to dialogue, citing Chinese unity with Europe and other parts of the world in defending the global trade system and asserting the US is isolated as a result of its unilateralism and protectionism.

"China has unwavering resolve to defend its legitimate right and interests," he said.

"If the US wants to fight, we will accompany to the end and we will also fight earnestly. In other words, the ball is in the US court."

With anti-US sentiment in China growing to the point that a privately produced Chinese trade-war fight song has gone viral in Beijing, Mr Zhang stressed unity and resolve in the country. He also emphasised the longevity of Chinese civilisation.