BEIJING (BLOOMBERG) - Chinese President Xi Jinping will deliver a major speech to mark 70 years since the official founding of the People's Republic of China (PRC), the government announced on Thursday (Aug 29).

The speech on Oct 1 will be accompanied by a national day parade showcasing China's advances in military technology, Mr Wang Xiaohui, executive vice-minister for the Communist Party's Publicity Department, said at a press briefing in Beijing.

"The purpose is to motivate and mobilise the whole party, the whole military, and all of the people to unite closely around the Chinese Communist Party (CCP) Central Committee with Mr Xi at the core," Mr Wang said.

The speech will be closely watched for hints on China's policy direction, especially with the nation facing pressure on multiple fronts, from the trade war with the US and protests in Hong Kong to a slowing domestic economy.

Mr Xi is expected to review the nation's achievements over the past 70 years and also talk about China's future.

He used a speech marking the anniversary of China's May Fourth movement earlier this year to urge the country's young people to stay loyal to the Communist Party.

The scale of the parade will be larger than those held to celebrate the 50th or 60th anniversaries of the PRC, Major-General Cai Zhijun, who is vice-director of the office for parade organisation, said at the press conference.

Mr Cai said the parade would show China's "great achievements" in national defence and the "accumulation of power for promotion of national rejuvenation". 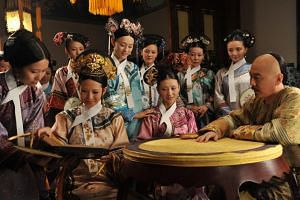 The parade will include strategic nuclear missiles and advanced fighter jets such as the nation's first stealth fighter, the J-20, the South China Morning Post reported.

Installations preparing for the celebration are already being erected in Tiananmen Square and security is being tightened across the city in preparation for the event.

The events will include a National Day Gala, an award ceremony and a musical performance, as well as commemorative stamps and coins, Mr Wang said.