BEIJING (REUTERS) - Britain no longer has any responsibility for Hong Kong and needs to stop "gesticulating" about its former colony, China's Foreign Ministry said on Monday (July 1), after the British government reiterated its commitment to the joint declaration with China on Hong Kong.

Protesters tried to storm Hong Kong's legislature on the anniversary of the city's 1997 return to Chinese rule on Monday, using a metal trolley and poles to smash windows amid anger over planned legislation that would allow extraditions to China.

China two years ago announced that it considered the joint declaration, which laid the blueprint over how the city would be ruled after its return to China, was a historical document that no longer had any practical significance.

Britain says the declaration remains in force and is a legally valid treaty to which it is committed to upholding, a point repeated by British Foreign Secretary Jeremy Hunt on Sunday.

Ahead of the 22nd anniversary of the handover on Monday, Mr Hunt also said that recent protests over the extradition Bill made it even more important to reiterate that Britain's commitment to the Sino-British Joint Declaration was unwavering.

"Britain has no so-called responsibility for Hong Kong. Hong Kong matters are purely an internal affair for China. No foreign country has a right to interfere," Mr Geng told a daily news briefing. 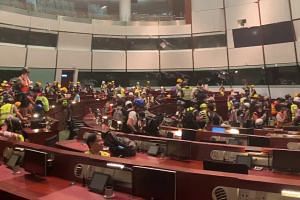 "Recently Britain has continuously gesticulated about Hong Kong, flagrantly interfering. We are extremely dissatisfied with this and resolutely opposed," he added.

"We urge Britain to know its place and stop interfering in any form in Hong Kong matters and do more for its prosperity and stability rather than the opposite."