BEIJING (AFP) - China on Friday (March 9) welcomed the historic announcement of a meeting between US President Donald Trump and North Korean leader Kim Jong Un, urging them to show "political courage" in pursuing the denuclearisation of the Korean peninsula.

"We welcome this positive signal by the US and North Korea in having direct dialogue," foreign ministry spokesman Geng Shuang told a regular press briefing, adding that "the Korean peninsula nuclear issue is moving in the right direction".

"We hope that all parties can demonstrate political courage and make the right political decisions," Mr Geng said.

During a visit to the White House on Thursday, South Korean National Security Adviser Chung Eui Yong announced the first meeting between a US president and a North Korean leader, which he said would take place by the end of May.

Under pressure from Mr Trump, Beijing has backed a series of United Nations sanctions against North Korea, sending relations between the Cold War-era allies to a new low.

For its part, China has long pushed for the US to meet North Korea, saying the two sides need to iron out their disagreements face to face.

The thaw came after a period of extreme tension between Washington and Pyongyang that sounded to many like the growing drumbeat of war. 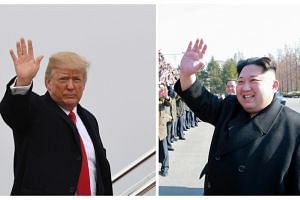 Mr Chung went to Washington after making a trip to Pyongyang, where he met Mr Kim, who, he said, "expressed his eagerness to meet President Trump as soon as possible".

Asked if China might host the summit, Mr Geng said at the press briefing that "our role in easing the tensions is indispensable".

After visiting Washington, Mr Chung will head to China and Russia.