Prime Minister Shinzo Abe has called for an emergency review into the safety of all children who are suspected of being abused, as more harrowing details emerge with the authorities investigating the death last month of 10-year-old Mia Kurihara.

The move comes as figures on Thursday (Feb 7) showed that Japanese police handled 80,104 child abuse cases last year, a significant 22.4 per cent spike from 2017 in the 14th straight year of increase.

The government has taken heat from many quarters, including the United Nations, over the botched handling of Mia's case.

Mia, who lived with her parents and one-year-old sister in Noda city in Chiba prefecture, east of Tokyo, had told her school in January last year that she was being subjected to constant torment by her father.

But this complaint was relayed to her very abuser.

"I'm being assaulted by my father. He wakes me up in the middle of the night, and, even in the day when I'm awake, he kicks and beats me," she had written in a questionnaire.

"Teacher, can't you do anything?" 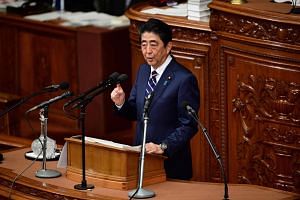 Japan steps up welfare acts after death of abused child

Armed with a document ostensibly bearing his daughter's consent, Mia's father pressured the child welfare consultation centre into releasing the questionnaire and Mia into his care.

Many experts have said that this amounted to a betrayal of trust in adult authorities. This lack of trust was a key reason why Mia did not report the abuse even once in the 10 months leading up to her death on Jan 24.

Her parents have since been arrested, but have not been charged.

Mia's father Yuichiro, 41, who was an employee at the Tokyo office of the Okinawa Convention and Visitors Bureau, was nabbed for inflicting bodily harm on his daughter while his wife Nagisa, 31, was arrested for abetting the violence.

Police are probing the likelihood that Nagisa failed to act because she was herself a victim of domestic violence - and had been cowered into doing her husband's bidding.

Mia was found dead in her bathroom after missing school for two weeks.

Yuichiro, who continues to insist that he was a disciplinarian but not a child abuser, said he called the police after Mia was knocked out cold during a scuffle while he was punishing her.

He said this "punishment" had lasted more than 12 hours - from 10am to 11.10pm when the police was called in - and involved Mia being splashed with cold water and grabbed by the neck.

Yuichiro had also told her school that she would be absent until Feb 4 as the family had returned to their home town in Itoman, Okinawa.

However, Nagisa has since told the police that Mia was, in fact, deliberately kept out of public sight as she bore visibly prominent bruises.

In punishing his daughter, Yuichiro also kept Mia standing for many hours on end, and forced her to stand up again when she collapsed.

The Mainichi Shimbun quoted Nagisa as having told the police: "I told him to stop but he never listened to me."

Mia was also deprived of sleep, and was not given enough food in the days leading up to her death.

The girl had originally been taken into protective custody at the nearest child welfare consultation centre in neighbouring Kashiwa city on Nov 7, 2017 after alerting her school to her harrowing experience.

She was released on Dec 27 that year on the condition that she stayed with other relatives.

She did not turn up for the first day of school on Jan 9, 2018, prompting a meeting with her parents three days later.

At the meeting, Yuichiro lambasted the school's handling of the matter and menacingly threatened to sue the city education board unless it gave him the questionnaire in which Mia had reported his abuse, which promised confidentiality in its instructions.

Yuichiro was not given permission on the grounds that Mia's consent was required, but he returned three days later with a document ostensibly bearing her permission.

It has since emerged that she had been coerced by her father into writing the statement.

She had said: "It is not true that I was beaten by my father."

"I don't want to see people from the consultation centre any more so do not come here."

Officials from the Kashiwa child welfare consultation centre sent her home, despite reservations over whether she made the statement out of her own volition.

At an emergency ministerial meeting on Friday, Mr Abe said: "We cannot regret enough the fact that the school, education board, child welfare consultation centre and other adults could not pick up on a heartbreaking SOS call for help, and act to protect a young life."

Tokyo wants to confirm the safety of all suspected child abuse victims across Japan within one month, and to reassess whether the necessary steps have been taken for each child.

In the event that their safety cannot be ascertained, the child will be taken into protective custody by a child welfare consultation centre.

This comes as the latest National Police Agency statistics show that the number of child abuse cases handled by the police last year topped 80,000 for the first time.

Despite the surge in child abuse cases, only in 1,355 instances were the parents or guardians arrested and charged for inflicting harm on children.

This indicates a societal preference for families to iron out their domestic issues. And also a reluctance for the judiciary system to step in, especially in cases which may be difficult to prove in the absence of external injuries.

On Thursday, the UN Committee on the Rights of the Child called on Tokyo to "prioritise the elimination of all forms of violence against children", noting "the high level of violence, sexual abuse and exploitation of children" in the country.

Mr Abe and his Cabinet ministers on Friday also pledged to take steps to improve information-sharing and coordination across different authorities and municipalities, to prevent cases like Mia's from falling through the bureaucratic cracks.

To beef up its resources, the government plans to add 2,000 more child welfare workers to its current 3,200 personnel by March 2023, though it has been difficult to hire trained experts.

But the Mainichi daily questioned in an editorial on Thursday if such measures were truly sufficient, noting that similar pledges to strengthen coordination have been made in the past each time the Child Welfare Act is revised, and each time an abuse case shocks the nation.

"Is it enough just to beef up consultation centres and strengthen coordination among relevant organisations?"

"A thorough investigation should be carried out to identify problems in the centres, local governments and national government programmes," it said.

"Pouring water into a bucket with a hole in the bottom cannot protect children."