HONG KONG (AFP) - From "be water" to "blossom everywhere", Hong Kong's black-clad pro-democracy protesters' tactics have evolved this week in their bid to overwhelm police by creating flashpoints in as many areas as possible.

The campaign of massive disruption has seen small groups of protesters emerge all across the city of 7.5 million people from Monday (Oct 11) to block intersections, vandalise shops, clash with police and damage the vital train network.

"We must blossom everywhere to divert the police force," read an anonymous post on Wednesday morning on an Internet message board popular with protesters, echoing other calls online.

The protesters' tactics have continually evolved throughout the crisis, which began in June when hundreds of thousands of people gathered for weekend rallies that swept through high-profile areas of the city.

The movement is being driven by outrage against eroding freedoms under Chinese rule.

The mass rallies seen at the start have faded away, partly because authorities now routinely reject applications for them to be held.

One earlier phase saw protesters appear in different parts of the city to block traffic or take on the police in hit-and-run strikes, and then quickly escape and emerge in another area.

The protesters branded these tactics "be water", referencing the philosophy of unpredictability espoused by martial arts superstar Bruce Lee - a Hong Konger. 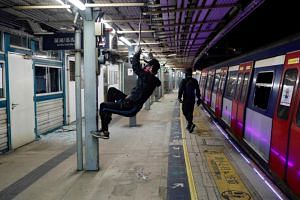 Continued chaos on Hong Kong roads due to strikes; all schools shut on Thursday

However, a crucial element of "be water" was the protesters' use of the subway system to jump from flashpoint to flashpoint.

Initially, the rail network's operators kept the trains going regardless of the protests, allowing easy movement.

But, under pressure from China, the operator began shutting down train services when protests were happening.

The protesters then began routinely vandalising the train network.

Rail lines are now often restricted or suspended entirely, making movement harder for those trying to avoid arrest or reach a different site to target the police.

Protesters have since embraced "blossom everywhere", which continues the goal of creating as many distractions for the police as possible.

But it calls on protesters to gather in smaller numbers and target their own local areas, instead of moving around.

"Do not go to other districts. Firstly, not familiar. Secondly, no transport," the post on the online messaging board calling for "blossom everywhere" read on Wednesday.

Until this week, protests had also generally been confined to evenings or weekends.

But "blossom everywhere" has seen three straight days of maximum disruption that began on Monday.

As part of this, protesters have laid out bricks in neat grids and built mini walls on some roads.

On others, they have strewn corrugated metal sheets, umbrellas, flower pots, bamboo poles and even couches.

The tactic appears to have succeeded in achieving massive disruption, with a police spokesman saying on Tuesday that Hong Kong was "on the brink of total collapse".